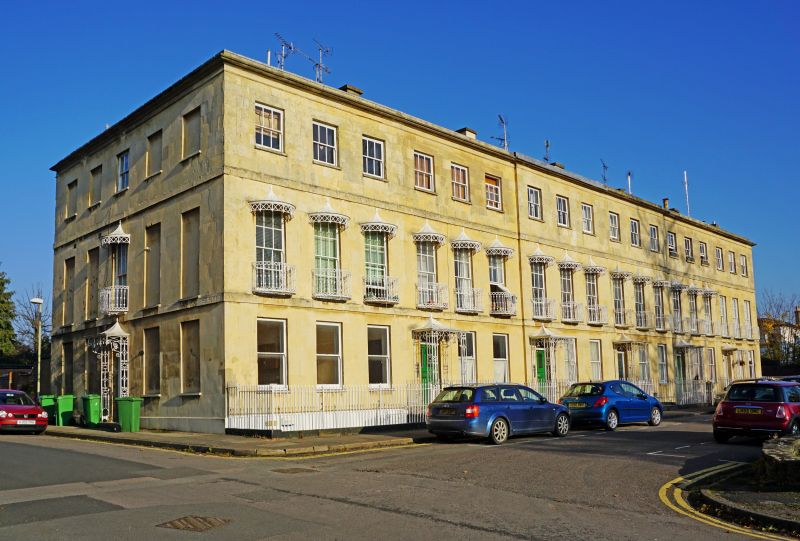 Terrace of 6 houses, now houses and flats, and attached
railings. 1816-17. Limestone ashlar over brick with roofs
where original, brick and stucco party-wall stacks and iron
balconies, canopied hoods, porches and railings with lead
enrichments. Double-depth plan with some service ranges to
rear; symmetrical design.
EXTERIOR: 3 storeys on basements, attic storey to rear to
central 4 houses; 18 first-floor windows (3 per house); the
central 2 houses break forward. Ashlar detailing includes
first- and second-floor bands, frieze and cornice. 6/6 sashes
where original (taller to first floor) with 3/3 sashes to
second floor; basements have 3/3 sashes; all in plain reveals
and with sills. Entrances to left with that to No.38 to left
return: part-glazed 5- and 6-panel doors with lozenge frieze
and fanlights, with batwing and circle glazing bars where
original. Left return: 5 first-floor window range; central
similar entrance, above this a 6/6 then 3/3 sash, otherwise
blind openings. Rear retains several 6/6 and 3/3 sashes. To
rear of No.44 the service-wing is open to ground floor and
supported on column cluster.
INTERIOR: retain original joinery including panelled shutters
to some windows, also original plasterwork including
embellished cornices. No.44 has moulded cornices throughout
ground and first floors with floral ceiling friezes; mainly
6-panel doors in tooled architraves with flowers to corners;
double dividing doors between ground-floor rooms with fluted
architrave and flowers to corners; some marble fireplaces;
dogleg staircase has alternate stick and rod-and-bobbin
balusters with wreathed handrail; archway in hall on corbels.
No.48 has dogleg staircase with stick balusters and wreathed
handrail; embellished cornices.
SUBSIDIARY FEATURES: area spearhead railings. Porches have
open-lozenge motif to uprights and scrolled friezes with tent
hoods. First-floor individual balconies have rod and star
motif with central scrolled panel and lattice friezes;