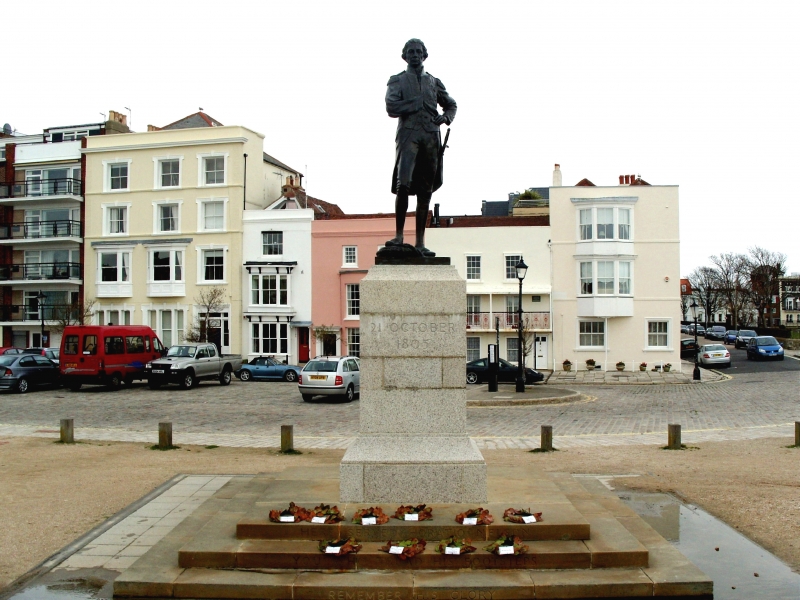 Monument. Erected 1951. Moved from Pembroke Gardens to its present location from Pembroke Gardens in 2005. By F Brook Hitch, FRBS, to designs by Dr HJ Aldous LRCS, LSA. Bronze statue of Lord Nelson on granite base set on stepped plinth, bronze plaque on 3 sides. The monument is near the place on the beach where Nelson embarked for HMS Victory on 14 September 1805. Main inscription reads "Horatio Viscount Nelson K.B., Duke of Bronte in Sicily, Vice-Admiral of the White. His last hours in England before leaving for the battle of Trafalgar were spent at the George Hotel, High St., Portsmouth which hotel was destroyed with a great part of Portsmouth in a German air raid on this city on January 10th-11th 1941. His remains were brought to Spithead December 4th 1805 on board H.M.S. Victory which ship was badly damaged in the Forefoot by a bomb in a raid on the 10th March 1941." On another plaque is inscribed Nelson's prayer. The monument was presented to the city in 1951 by Dr HJ Aldous.
SUMMARY OF IMPORTANCE: The monument has special interest as a high-quality piece of post-war public art by a noted sculptor, dedicated to a major figure in British history. It also has group value with a row of listed town houses and the Royal Garrison Church nearby. It was moved to its present location from Pembroke Gardens in 2005.