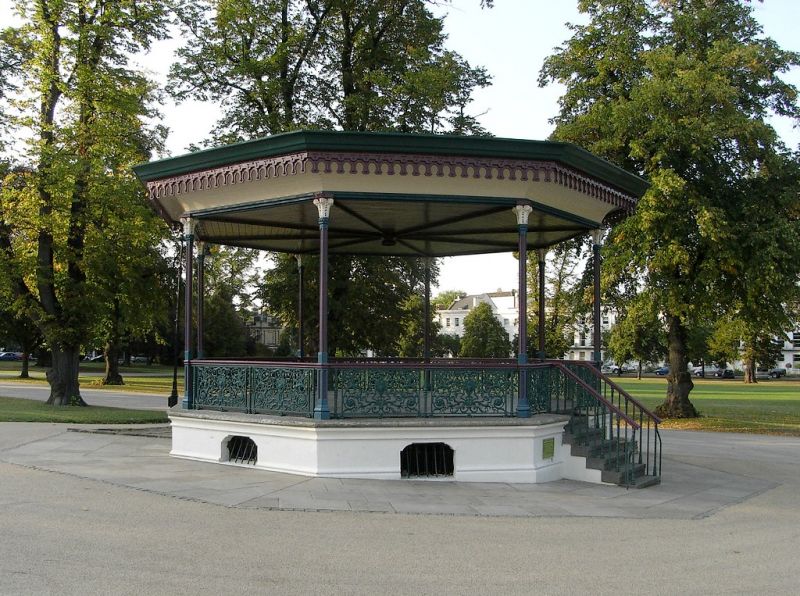 Bandstand. c1895; restored with original colour scheme by
Cheltenham Civic Society in 1994. Octagonal stone base with
iron columns and balustrade; wooden and ribbed tester with
coved section and scalloped board below moulded eaves;
concealed peaked roof. Steps to south-east. Fluted columns to
angles with acanthus caps and with balustrade between which
has embellished panels of floriate scroll decoration with mask
to centre, the design of which came from a pattern book (held
by Ironbridge Gorge Museum) produced by the Coalbrookdale
Company, Ironbridge: Ornamental Panel No.36. A similar design
is found on the ironwork of Thirlestaine Court, Thirlestaine
Road (qv), and The Savoy Hotel, Bayshill Road (qv).
HISTORICAL NOTE: Montpellier Gardens was laid out for Pearson
Thompson by JB Papworth in 1825-6.
(Chatwin A: Cheltenham's Ornamental Ironwork: Cheltenham:
1975-1984: 48; Sampson A and Blake S: A Cheltenham Companion:
Cheltenham: 1993-; Colvin H: A Biographical Dictionary of
British Architects 1600-1840: London: 1978-: 618).