Netherton Hall Including Terraces to North, South, and West 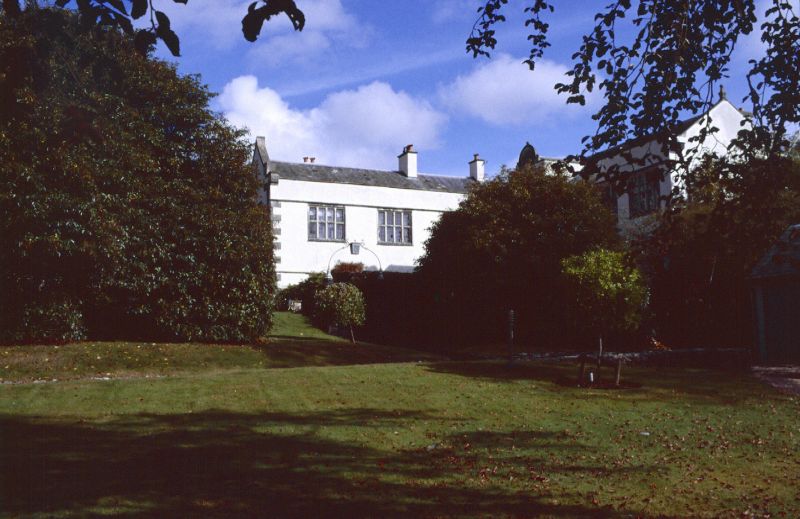 Mansion built by Sir Edmund Prideaux, now used as a school. Dated 1607 parts may be
older, it was rebuilt from a ruinous state 1836 - 1844 (the architect was J.
Goldsworthy), modernised in 1902. Plastered stone rubble with Beerstone ashlar
dressings,the rear (facing east) is exposed local stone rubble with some C19 brick
dressings; stone stacks, mostly with Beerstone ashlar chimneyshafts with soffit-
moulded coping; slate roof.
Plan and development: irregular courtyard plan house built on a flat terrace on a
gentle hillslope. The main block faces west-north-west, say west. This contains
the 2-main rooms, one either side of a cross passage. The smaller right (south)
room is a parlour and the larger left room is the great hall. Both are heated by
rear lateral stacks. The front doorway has a 2-storey porch which appears central
since a library (former parlour) crosswing projects forward at right angles in front
of the left (north) end of the front. The library/parlour has an outer lateral
stack and there is the main stair between the library/parlour and the hall. The
main cross passage leads back to a large heated lobby in the south wing and at the
back of this a stair turret projects to rear into the tiny courtyard. This
courtyard is really no more than a light well. The rest of the south wing, the
north wing and the east wing house mostly service rooms. Most of the rooms are
heated by a series of axial or lateral stacks. The mid C19 rebuilding was obviously
massive in scale and it is very difficult to work out how much of the building is
earlier since it is clear that 1607 features have been adapted and maybe moved.
Only extensive stripping of both external cladding and internal plaster would reveal
how much original structure remains. It seems-that the main front block is original
with the library/parlour crosswing. Another matching crosswing at the south side is
thought to have been demolished in the C19. The courtyard was probably larger
originally; the passage rear doorway looks as though it was once external. Some
early C17 carpentry detail in the present kitchen/dining room area suggests that
there was rear service wings.
The house is mostly 2 storeys but parts are 3 storeys and there is a cellar under
the south end of the front block.
Exterior: the main block has a symmetrical 2:1:2 window front of Beerstone ovolo-
moulded mullion-and-transom windows with continuous hoodmoulds on both floors. The
2-storey porch outer arch is a Tudor arch with moulded surround (the passage front
and back doorways are similar). Directly above is a lead coat of arms set on a
wooden board in a Beerstone frame. The parapet of the main block is carried round
the porch and the gable here is a round arch on shoulders and carved as a shell and
inscribed with the date 1607. There is a similar fenestration on the north and
south sides although the windows are less regularly arranged. The north side
includes 2 tall 6-light windows with 2 transoms, one of them at the end of the hall.
The south end of the main block includes a C19 Beerstone canted oriel window. The
roofs have shouldered gables with coping and some include ball finials. The front
of the library/parlour crosswing has stucco quoins. The rear includes C19 timber
casements. All the windows contain rectangular panes of leaded glass. At the back
one of gables includes a carved plaque recording the 1836 - 44 renovation of the
house by Sir Edward Sanders Prideaux. The large kitchen stack has a bell attached
under a gabled head.
Interior: shows mostly C19 details in Tudor/Jacobean style. The main rooms are
panelled and many of the rooms have ornamental plaster friezes in Elizabethan style.
The main stair in the library/parlour crosswing is a large open hall stair with
twisted balusters, the other stairs have turned balusters. This C19 work covers
most of the structural detail although some original Tudor arch Beerstone fireplaces
are exposed. Some of the C19 fireplaces have reused or adapted C17 fireplaces and
some are new in the same style. The only carpentry exposed are the beams in the
present school kitchen/dining room which have deep chamfers and scroll stops. Other
early carpentry is thought to survive. For instance the owner reports finding
evidence of a gallery in the main hall whilst doing repair work there. The roofs
were not inspected.
Around the house are a series of C19 terraces revetted with stone rubble and with
Beerstone coping. That on the south side is the most ornate. It is flanked by tall
walls divided into bays and including gateways with square section Beerstone ashlar
posts. The front end is semi-circular with a Beerstone balustrade of large vase
shaped balusters set diagonally.
Netherton Hall is one of an attractive group of listed buildings which make up the
hamlet of Farway.