A Grade II* Listed Building in Fratton, City of Portsmouth 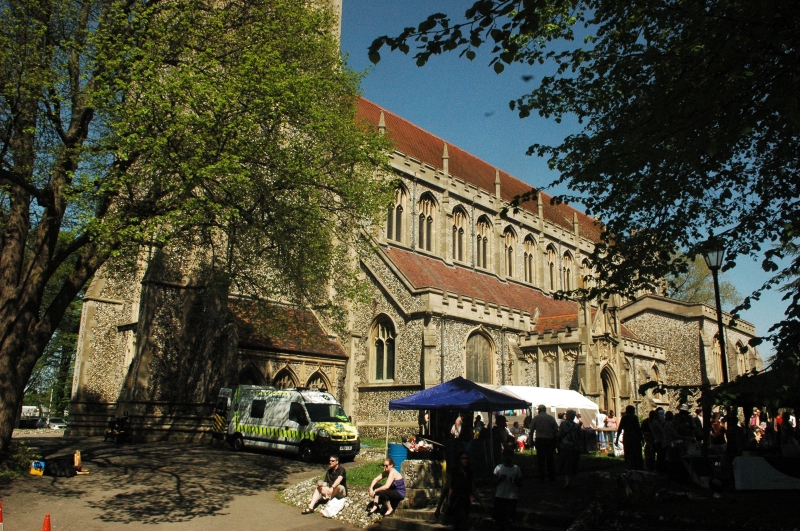 pointed arch, flanking colonnettes. To left face of chancel
arch is a doorway leading to the vestry, organ loft and
ambulatory passage. Within right face of arch is doorway to
Lady Chapel. At east end of chancel is an ornate wood panelled
and traceried reredos set against panelled wall surface with
large arched rib intersecting the panel pattern. Above is the
7-light Perpendicular style window with stained glass.
To north of chancel are 2 recessed panelled wall surfaces
traceried and set under moulded pointed arch with hoodmould.
Lower part of north side right-hand panel has opening set
under flat pointed stone arch. Upper tier with moulded stone
band has on right a Perpendicular style window and on left
panelled wall surface with similar rib tracery pattern as
window. Window and wall panels are flanked by colonnettes from
which spring the Lierne vaulted ceiling with carved bosses at
rib intersections. South face has similar window and wall
panels.
Vestibule at west end with doors leading to north and south
porches. Main west entrance door and 4-light window with
stained glass. Engaged column at each corner of vestibule from
which spring the vaulted ceiling. 2-leaf door to nave set
under stone pointed arch springing from flanking pilasters.
West face on nave side has recessed panels and pilasters.
STAINED GLASS to aisle window by Burlison and Grylls
c1890-1920.
FITTINGS: delicate cast-iron chapel screens. Wide octagonal
stone pulpit with sub-structure embellished by miniature
vaulting.
MONUMENT: cartouche in north porch to Thomas Bowerbane 1761.
HISTORY: the original medieval church survived until 1843 when
it was replaced by a church designed by TE Owen. This was
demolished in 1887 and replaced by the present Church. The
foundation stone was laid by Queen Victoria's eldest daughter
Empress Frederick of Prussia on 9 August 1887.
(Balfour A: Portsmouth: Highgate Hill, London N19: 1970-: 60,
61; Lloyd DW: Buildings of Portsmouth and its Environs:
Portsmouth: 1974-: 128; The Buildings of England: Pevsner N &
Lloyd DW: Hampshire and the Isle of Wight: Harmondsworth:
1973-: 441, 442; The Portsmouth Papers: Hubbuck R: Portsmouth:
1969-: 12, 13, 14; Offord J: Churches, Chapels and Places of
Worship on Portsea Island: Southsea: 1989-: 57).