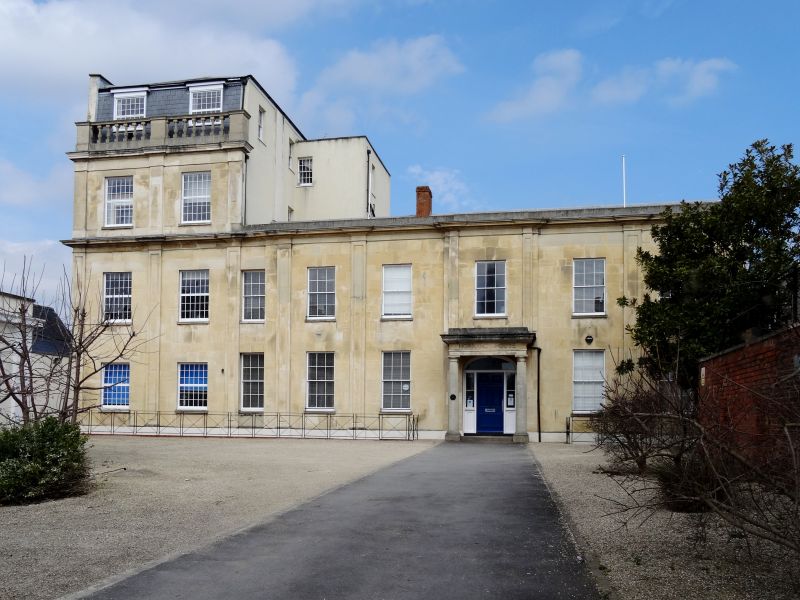 Formerly known as: Segrave House HIGH STREET.
Villa, later hospital, now offices, and attached railings.
c1810-20, shown on The Post Office Map of 1820, with wing to
left of 1839 added as wards for 40 in-patients, and later
alterations including restorations of c1990. Ashlar over brick
with concealed roof to right and slate mansard roof to left,
brick off-centre left stack to main range; iron area railings.
EXTERIOR: 2 storeys, 5 windows with added 3-storey and attic,
2 first-floor window range to left (north). Panelled pilasters
to full height between windows and to ends throughout, frieze
and cornice with blocking course to main range. 6/6 sashes to
main range, taller to ground floor, with multi-pane windows at
left. Main range has central entrance a 6-fielded-panel door
with side-lights, wide arched patterned fanlight and distyle
Doric porch with architrave, frieze and cornice with blocking
course. Range to left: to second floor a frieze and cornice
with low balustrade. Some 15/15 sashes remain to left return.
INTERIOR: many original features survive; hallway has niche to
right and winding open-well stone staircase with shaped
cantilevered treads and stick balusters with wreathed
handrail, embellished with a panel of scrolled wrought-iron
ornament to landing; semicircular upper hallway. Hallway has
inner doorway with fanlight with decorative glazing bars;
coving. Main ground-floor reception room to right has
embellished acanthus cornices and ceiling friezes; archway
between front and rear rooms has fluted architrave and flowers
to corners. Windows have panelled reveals and shutters,
6-panelled doors with reeded architraves; first floor retains
embellished cornices.
SUBSIDIARY FEATURES: area railings have X-motif (some
replaced).
HISTORICAL NOTE: Shown on Merrett's Map of 1834 as Segrave
House, probably after William Fitzhardinge Berkeley who became
Lord Segrave in 1831 (and Earl Fitzhardinge in 1841); it is
reputed that the villa was sold in 1839 and converted into

Cheltenham's first General Hospital and Dispensary, when a
wing to the left was added. However, George Rowe indicates
that this was built as a dispensary in 1813 (the year the
Cheltenham General Hospital and Dispensary is known to date
from), with wards for 40 in-patients added in 1839. In 1849
the hospital was closed when a new one opened on Sandford
Road, however, the building was used as a hospital for
officers invalided from the Crimean War (1853-6). Following
this the wards were reputed to have been used as dormitories
for female student teachers, prior to the erection of
Shaftesbury Hall, St Georges Place (qv) in c1869.
Cheltenham Civic Award for Restoration, 1991.
(Rowe G: Illustrated Cheltenham Guide: Cheltenham: 1850-1969:
93; Hart G: A History of Cheltenham: Stroud: 1965-1990: 159).