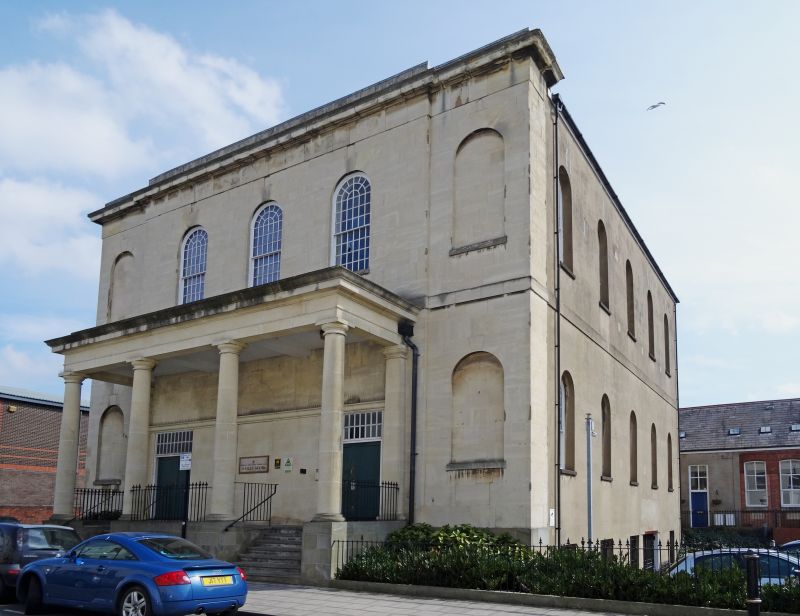 Wesley Chapel, unused at time of survey. 1839 with c1960s
alterations. Centenary Chapel (one of 100 built to celebrate
the Centenary of Methodism). Ashlar over brick to front facade
with stucco to right return and pinkish-red brick to left
return, hipped slate roof.
EXTERIOR: 2 storeys on basement, 3 bays: 1-3-1. Centre breaks
forward and has round-arched upper windows, blind round-arched
openings to end bays. First-floor band, and band below cornice
with inscription. Central c1960s entrance has board doors with
flat canopy. Upper stage has 3 windows to central bay: 18/24
sashes with radial glazing to heads. Left return has 5
upper-stage windows. First-floor plat band. Round-arched
windows to each floor, those to ground floor have 18/18
sashes, those to first floor have 18/24 sashes, all with
radial glazing to heads. Blocked basement openings have flat
arches of rubbed brick. Similar fenestration to right return.
Some windows have coloured glass.
INTERIOR: reputed to retain gallery to 3 sides on iron
columns. Flat plaster ceiling with moulded cornice and barrel
vault above organ loft. Late C19 pews.
HISTORICAL NOTE: cost between »4,500 and »4,850. It originally
had a portico.
(RCHME: Nonconformist Chapels and Meeting-Houses:
Gloucestershire: London: 1986-: 77; Blake S: Cheltenham's
Churches and Chapels AD 773-1883: Cheltenham: 1979-: 25).