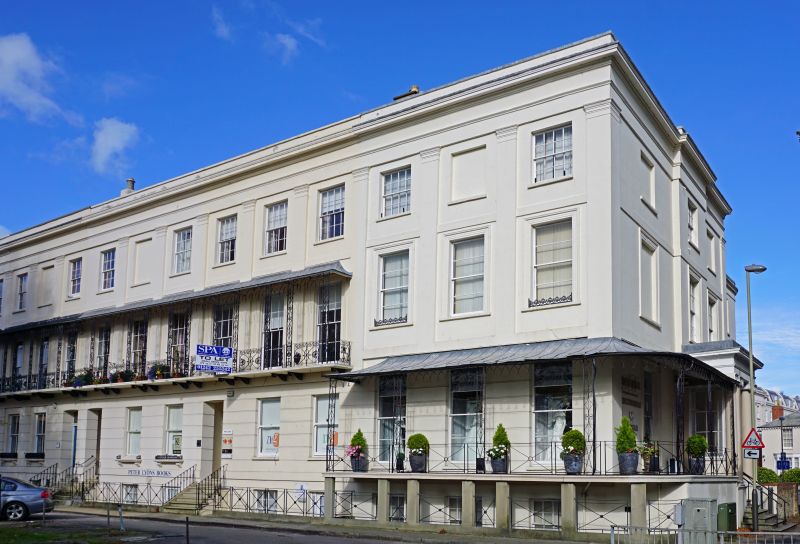 Entry Name: Numbers 1 to 13 with Attached Area Railings Throughout and Pier to Number 1

Terrace of 13 houses and attached area railings throughout and
pier to No.1. c1834, shown as laid out but not yet built upon
on Merrett's Map of 1834. Builders, Robert Todd and William
Prosser, probably to designs by John Forbes. Stucco over brick
with concealed, double-pitched roofs; iron railings and
verandahs; ashlar pier. Double depth plan with side stairhalls
and mainly 3-lower-storey service ranges to rear.
EXTERIOR: 3 storeys on basements, 39 first-floor windows (2
per house). Stucco detailing includes horizontal rustication
to ground floor, first-floor band surmounted by Doric
pilasters to ends and between windows through first and second
floors, interrupting second-floor band; architrave, frieze,
cornice and blocking course with copings. Mainly 6/6 sashes
(where original) taller to first floor, some blind central
openings to second floors; all in plain reveals and with sills
to ground and second floors. Entrances to right and left:
flights of roll-edged steps to double 4-panel doors with
overlights (with glazing bars where original), some set back,
several retain hand-and-wreath motif knockers. Entrance to
No.13 to right return has Ionic porch with 2 pairs of columns,
architrave, frieze and cornice; bay above porch breaks
forward. Windows to right return (3+1) have tooled
architraves, 6/6 sashes and blind openings. To rear of No.13 a
full-height wide bow with 8/8 sashes with tooled architraves.
Rear has 6/6 and 8/8 sashes; a later Victorian oriel window to
No.7.
INTERIOR: many retain original features, varying in level of
embellishment; No.7 has egg-and-dart cornice to hallway,
dogleg staircase has stick balusters with wreathed handrail;
Art Nouveau arcade to hall has roses and cartouche; first
floor has fireplace with pilasters and dentil cornice, main
room to front has late C19 panelling and egg-and-dart cornice
with scrolled ceiling frieze; panelled dividing doors between
front and rear rooms. No.8 has similar staircase. No.9 has
similar staircase, ground-floor front room has egg-and-dart
cornice and deep moulded frieze; first-floor has fireplace
with fielded panels and to rear a Regency fireplace with
circle motif. No.10 has similar staircase with alternate stick

and rod-and-bobbin balusters, marble fireplaces with corbels,
good cornices. No.11 has similar staircase (balusters
renewed), cornices embellished with egg-and-dart, acanthus
modillions and fleurons. Many retain shutters to windows.
Otherwise not inspected.
SUBSIDIARY FEATURES: first-floor verandah has double heart and
anthemion motif balustrade supplied by Carron Company except
to right (No.13) which has ground floor verandah to front and
return with X- and circle-motif balustrade. Area railings have
X-motif and embellished rods to sides of steps. Some
ground-floor window boxes with circle frieze. To No.1 are
spearhead railings at left with pier to end.
HISTORICAL NOTE: the Square originally overlooked the Imperial
Nursery.
(Chatwin A: Cheltenham's Ornamental Ironwork: Cheltenham:
1975-1984: 38; Radford S: The Terraced Houses of Cheltenham
1800-1850: 1992-: 106-113; Cheltenham Local History Society
Journal, Vol 7: Blake S: The Unfortunate Mr Forbes: 1989-:
7-27).