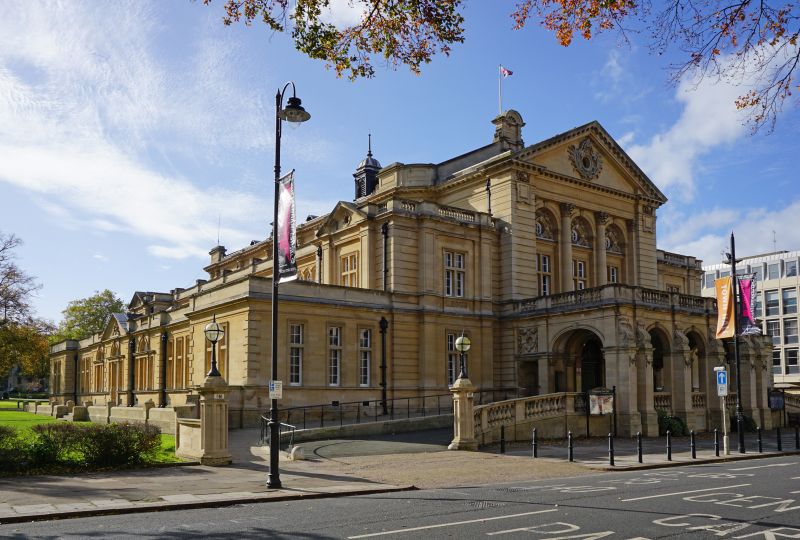 Eclectic Classical style. Horizontal rustication three-bay frontage with projecting porte-cochere with three arches to front, pilaster butresses with inverse scrolls above, frieze, cornice and balustrade; and with curving approach ramps with balustrade and end octagonal piers with lamp standards. Above is a three-bay pedimented front with engaged Corinthian columns and wide end pilasters with horizontal rustication, with modillion cornice. Mullion and transom windows with multi-pane casements, central windows have lunettes over with glazed oculi. Cartouche and oculus in pediment. Cupola on roof. The ballroom has five-bay arcades with Corinthian columns. Left return has verandah.

INTERIOR: retains many original features. These include entrance hall with domed ceiling, then to right a stairhall with open-well staircase with iron balustrade panels of lyre ornament; lightwell. Central aisled hall has five-bays with engaged marble Corinthian columns and round-arched openings, foliate decoration in spandrels, balconies at first floor forming boxes, with round-arched openings above with keystones; stage has segmental arch over, and similar to opposite end; large plaster cast statues of Edward VII and George V, by Boultons of Cheltenham in niches to aisles. To left an octagonal hall has marble and tile octagonal well with Doulton ware urn; mosaic floor; lyre motif to balustrade above.

HISTORICAL NOTE: plaque to base of Porte-cochere records: 'The erection of this building was decided upon in the year 1901, the third successive year of the mayoralty of Alderman George Warren. And this memorial stone was laid on the 1st October 1902, by Alderman Col Rogers VD JP Mayor of this borough, in the fourth yr of his mayoralty, to commemorate the coronation of King Edward and Queen Alexandra. Architect FW Waller FRIBA. Contractors Collins and Godfrey. ET Bridges town clerk.'

Although the plan and overall design are conservative for the date, this is a prominent sited and notable example of an Edwardian local architect.