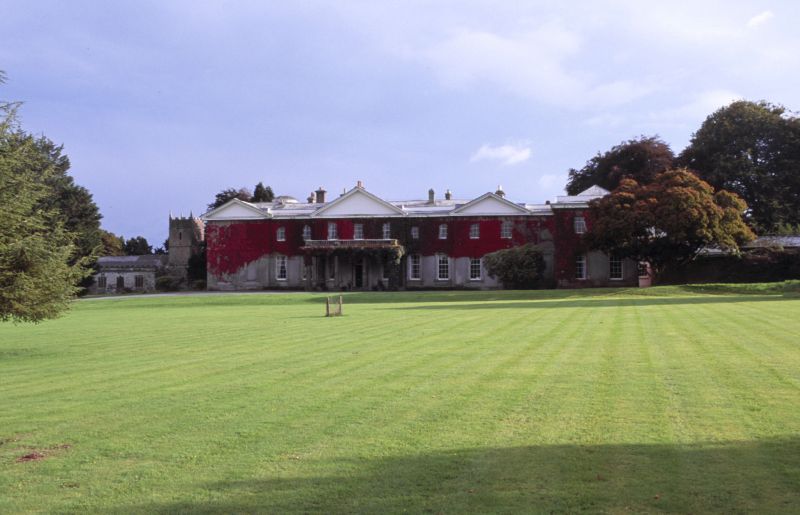 Country house. Completed 1810 by James Green, (the County Engineer) for the
Fortescue family with later C19 addition. Rendered stone walls. Hipped slate roof.
Rendered brick stacks.
Plan: asymmetrical plan with north entrance to left of centre through short passage
leading to stairhall, to the left of which is galleried ante-room with doors leading
to principal rooms at front side and rear. Large room to its left of 2 storey
height with gallery running round it may have been a ballroom or saloon. The
function of the rooms to the right of the stairhall is uncertain as some subdivision
has taken place but some at least were service rooms, and original front wing
projects from the right end and a C19 addition at this end was probably also for
service purposes. Undoutedly an earlier house existed on the site and the evidence
of some circa late C16 panelling and beams in one of the rear (south) rooms suggest
that the core of the present house dates back to what was there before, but in
virtually unrecgonizable form. (The evidence of an old print corroborates this).
The house is designed so that it has 3 fronts - the north front forming the entrance
has a porte-cochere, the east front (left end) has a great portico and the south
front (rear) has a 2-storey porch. Greek revival Doric and Ionic styles.
Exterior: 2 storeys. Worth entrance front has 5 symmetrical bays - the outer and
central ones pedimented - with an original wing projecting from the rignt-hand end.
Arrangement of windows is 2:2:3:2:2:2; the windows to the left end bay are blind,
otherwise 9-pane sashes on first floor, tall 15-pane sashes below, all set in eared
architraves. In front of the Greek Doric balustraded porte-cochere set on 4
columns. Behind it is an arched doorway with original panelled double doors.
The imposing left-hand elevation is dominated by a giant tetrastyle Doric pedimented
portico. 9 symmetrically placed window openings but apart from those on the first
floor to the rignt and ground floor to right and centre these are blind. The first
floor windows are later C19 2-light casements wnereas below them are French windows
- evidently in original openings but themselves probably later. Between the columns
are 3 contemporary stone vases. In the roof benind the portico is a large lantern.
The rear elevation is more irregular than the front, 9 windows wide witn a 2-storey
pedimented porch to left of centre, a wing projecting at an obtuse angle from the
right-hand end, and the left-hand section recessed slightly with a later C19
extension beyond. Mainly original fenestration on the first floor and ground
floorleft of similar sash windows. The 2-storey porch has a segmental arch flanked
by pilasters. The wing to the right has a large original bay window on the ground
floor with a flat roof forming a balcony on top of it which has possibly
contemporary wrougnt ironwork to balustrade.
Interior: fine largely complete interior mainly in the Greek Doric and Ionic style.
The principal ground floor rooms have decorative plaster cornices and ceiling bands.
The galleried ballroom has pilasters round the sides with a frieze of triglyphs and
mutules. The room to its rear also nas pilasters and 2 fluted Ionic columns
flanking the doorway. The cantilevered gallery over the ballroom has a cast iron
balustrade, Ionic columns and a lantern above with a plaster decoration around it.
Some original chimneypieces also survive. One of the rear south rooms contains
sections of late C16, C17 and C18 panelling with late C16 cresting and finials and
heraldic shields in the frieze of the families who have occupied the manor. Also
preserved in this room are late C16 moulded ceiling beams.
This is one of the earliest surviving Greek Doric revival houses and remains very
unaltered whilst incorporating probably the core of an earlier house.