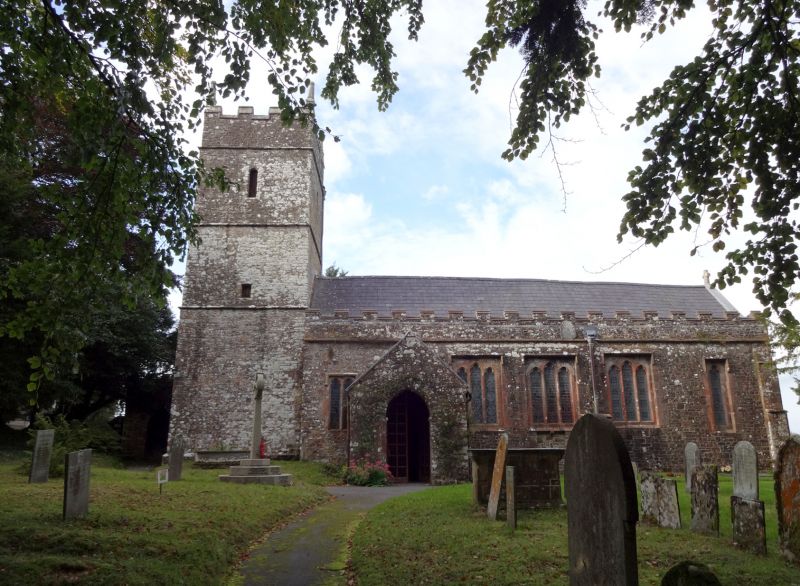 BUCKLAND FILLEIGH
SS 40 NE
7/2 Church of St Mary
4.10.60
-
GV II*
Parish church. The earliest fabric is Norman with late C15 or early C16 additions,
restored in 1876 and 1887. Stone rubble walls. Gable-ended slate roof.
Plan: nave, chancel, north aisle, west tower and south porch.
The nave and tower preserve some Norman fabric, a remodelling probably took place in
the late C15 or early C16 when the north aisle and south porch were added.
Restorations took place in 1876 and 1887 when the wagon roofs were reconstructed.
Exterior: 3-stage battlemented tower with obelisk finials. Simple roundheaded
belfry openings. No west doorway. 2-light Decorated style late C19 west window.
Late C19 or early C20 lean-to vestry against north side of tower. North aisle is
battlemented. It has 3 late C15 or early C16 3-light granite mullion windows. That
to the west has 2-centred arched lights and square hoodmould. The central window
may be restored, it has ogee-moulded stepped lights without a hoodmould. The
easternmost window to the aisle has cinquefoiled lignts with hoodmould above. C19
Decorated style east window to aisle of 3 lights. The east window to the chancel is
similar but larger. The chancel and nave are also battlemented. The windows on
south aisle are restorations in the Early English style of 1 and 3-lights with ogee
heads. To the west of the porch, however, is a C15 2-light cinquefoiled window.
Simple gabled south porch with plain rubble 2-centred arch which has chamfered
imposts. There are various lead rainwater heads and downpipes on the exterior of
the church which are probably C18.
Interior: porch has old wagon roof with moulded ribs and small carved bosses.
Simple Norman south doorway which has a round arch, chamfered imposts and jambs.
The internal walls of the church are unplastered. 3-bay granite arcade of Pevsner
A-type piers with moulded cup capitals and 4-centred double chamfered arches. No
chancel arch. Simple rounded tower arch.
The roof over the nave has been renewed but the old wagon roof survives over the
aisle with moulded ribs, carved bosses and wall-plate. The old carved bench ends
survive displaying the emblems of the Passion, the Keys of St Peter and a coat of
arms - possibly the Giffards. The pulpit also appears to be made up of old carved
bench ends.
Simple late medieval octagonal font of Caen stone.
2 good later C17 wall memorials survive. One at the west end of the aisle has a
slate plaque with segmental pediment above and a column either side with stiff leaf
capitals. Above the pediment are the arms of the Fortescues and there is a Latin
inscription to Henry Fortescue. The other memorial is over the south doorway and
has a slate plaque with a scrolled pediment above with the Fortescue arms at the
centre. Ionic column to either side of plaque and heraldic shield below. Dated
1655 to John Fortescue. On the north wall is a small early C19 memorial to Henry
Bearn. Adjoining is a pedimented memorial dated 1752 to Mary Spooner daughter of
William Fortescue with an epitaph below. Obelisk shaped memorial to John Inglett
Fortescue who died 1840.
At the east end of the aisle is a bas relief memorial to Ann Fortescue who died 1815
depicting 2 mourning men, by Flaxman the sculptor.
Some medieval glass is preserved in a south window depicting the arms of Fortescue
impaled with Courtenay of Molland, Filleigh, Dennis of Orleigh and Sackbye.