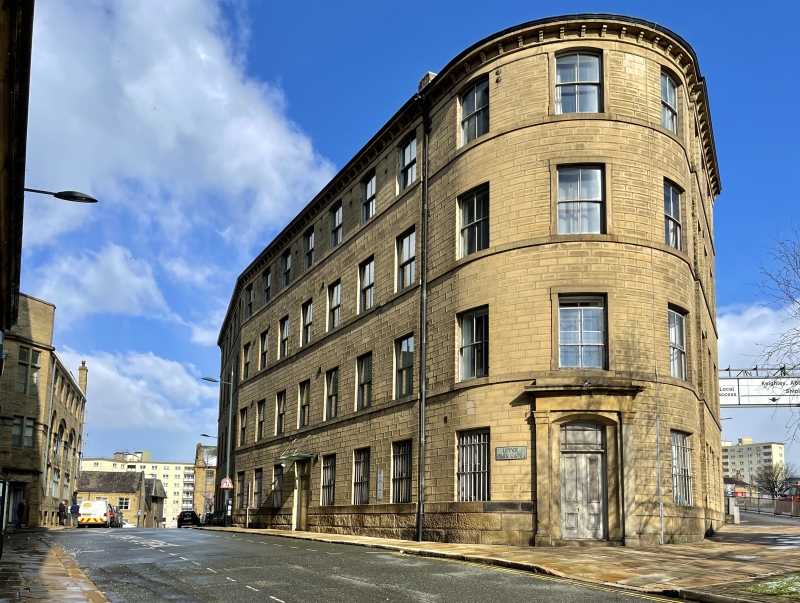 2.
A former woollen mill and warehouse on corner site with Upper Park Gate. The mill,
of circa 1865, is built on to and incorporates the remains of East Brook House
which retained its grounds known as Peckover Park until the latter part of the
1850's. The remaining facade is set back to north of mill. Circa 1800 with
restrained neoclassical detailing. Two-storeys, basement and attic, finely dressed
ashlar. A 3 bay front with crisply moulded cornice and parapet, originally with
3 blind balustraded panels, one only survives to left hand below later turret
feature with hipped roof - later attic storey added to right. Tripartite windows,
shallow reveals and slender dividers, entablatures sharply moulded, those on ground
floor as Venetian windows with entablature carried up over arch and slender columns.
Central former doorway round headed and recessed for one order. The ground floor is
largely obscured by lean-to additions. One similar blocked window to north return.
The mill is still in the early to mid C19 tradition. Four-storeys dressed sandstone
"brick". The corner, of 3 windows, is bowed sharply and slightly inset. Sill bands
and bracketed eaves cornice. Pilastered entablature doorway to centre of bowed
corner. Twelve window plain range to Upper Park Gate.

East Brook House was built by Edmund Peckover a member of the Norfolk family. After
briefly trading as a woolstapler he set up a banking firm with his nephew Charles
Harris, later to become the Bradford Old Bank.