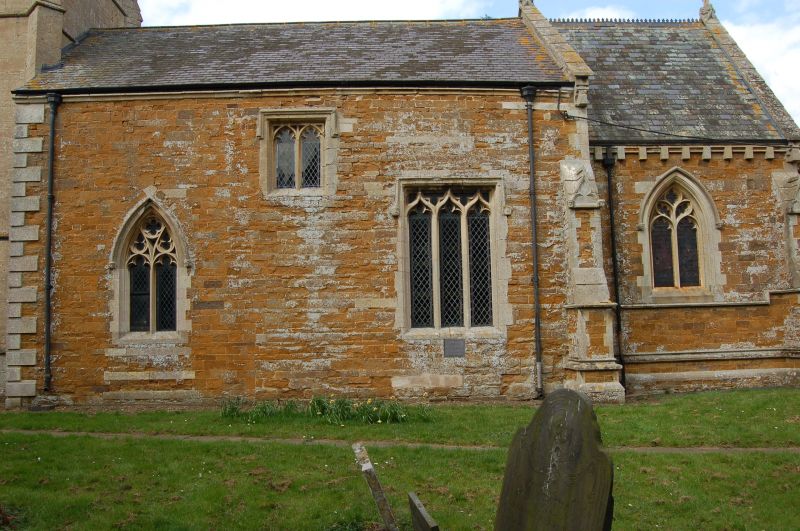 Parish Church. Largely Perpendicular, but restored in 1870 by Joseph Goddard
of Leicester. West tower, nave, north transept and chancel. Coursed ironstone
rubble with limestone dressings and ashlar tower. Welsh slate roofs. C15
tower has plinth and angle buttresses and is of four stages. West doorway
with chamfered arch and hood mould. Paired traceried lights above it, and
paired foiled two tiered lights to bell chamber. Embattled parapet. Nave
has one Victorian 2-light Decorated window to south west, possibly in former
doorway, the others to both north and south are Perpendicular, of 2 and 3 flat
headed foiled lights, one on each side is at a higher level. Steeply pitched
Welsh slate roof. East end of nave and chancel given emphasis by ornate buttresses
with gablets and corbel heads, the chancel is further distinguished by a corbel
table of undecorated blocks, and plinth and string course, and cresting to
its steeply pitched roof. It is entirely of 1870. 2-light north and south
windows and 3-light east window all in Decorated style. North transept of
1810, given a large gothic window of 4-lights in 1870. Rendered, with low
pitched parapet roof, and buttresses.

Interior has west tower arch with cylindrical shafts, outer chamfer and hood
mould. South west window contained in a recess. Simple timber roof. Victorian
chancel arch with clustered and banded shafts with foliate capitals, dividing
wall between nave and chancel of banded coursed rubble. Ornate roof to chancel
with principal rafters supported from heavily wrought corbels. Encaustic floor
tiles. North transept is mausoleum housing a memorial to Francis Edwards,
d.1728 and other members of the Edwards family. It is a large marble tomb
raised on four steps, a pedestal base with corners chamfered with ornate volutes,
carrying an obelisk adorned with shields of arms and surmounted by an urn.
Other similar and related urns stand on pedestals in the corners of the room.
The monument was formally in the Churchyard. Jacobean pulpit with long blank
traceried panels. Font may be C14, simple octagonal basin rising from octagonal
shaft, with 8 sided tapering wood cover. Arms of George III in the tower.
Stained glass in chancel windows, 1856 and 1866.