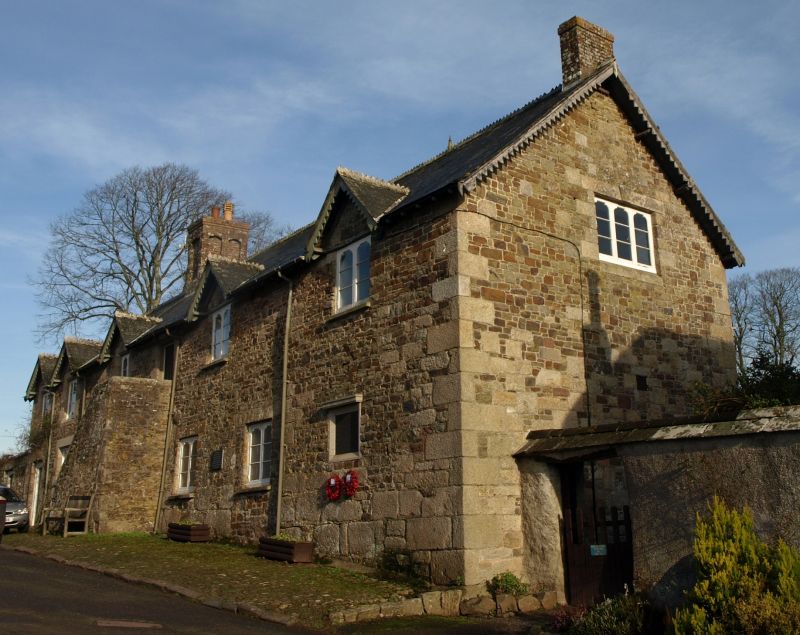 House and village hall, originally church house. Early C16 considerably altered and
probably extended in late C19. Coursed stone rubble walls incorporating some
granite ashlar in lower courses at right-hand end. Gable ended slate roof with
decorative late C19 ridge tiles. Large brick axial stack with recessed panels and
small brick stack at right gable end.
Plan: original plan not entirely clear as internal partitions have been removed but
the first floor would have been one long room, possibly heated by a fireplace at one
end and reached by external stone steps. On the ground floor there was a smaller
room at the right-hand end possibly with a passage adjoining it and a larger room to
the left. It is not clear whether both these rooms or only one were heated. The
cottage at the left-hand end, beyond the axial stack, may well be an extension
dating from a probable restoration of the building in the circa late C19 which also
involved a refronting and reroofing.
Exterior: 2 storeys. Long asymmetrical 5-window front of C20 2 and 3-light
casements with smouldered heads to lights. First floor windows have gables above
with decorative bargeboards. At centre is large external stone steps leading to
first floor doorway with C20 double plank doors. Similar doors to left of steps on
ground floor. At left-hand end is C20 plank door in frame with depressed 4-centre
arched head. All 3 doors are in a dressed granite surround with projecting
keystone. Windows to left-hand part are also in chamfered granite surround. The 2
ground floor right-hand windows are in altered openings and the right-hand one was
formerly a doorway.
Interior: ground floor room in right-hand part has high chamfered cross beams with
step stops. Between the 2 right-hand beams is a narrower one with mortices on its
soffit for a screen. The first floor room is remarkable in that it preserves its
original oak table and benches which were built into the floor as fixtures. What
survives is a long table against the rear wall with benches along either side and a
stool at one end. All are of relatively crude construction but with some attempt at
a neat finish - the central jowelled post for the stool has chamfered and stopped
edges.
Roof: 2 complete side-pegged jointed crucks survive and the rear blade to one
against the rignt gable end wall. They have morticed cranked collars but the
purlins are probably replacements and run along the backs of the trusses.
The Prayer Book Rebellion began in Sampford Courtenay and started on 10th June 1549
wnen William Hellyons was killed in a brawl on the church house steps.