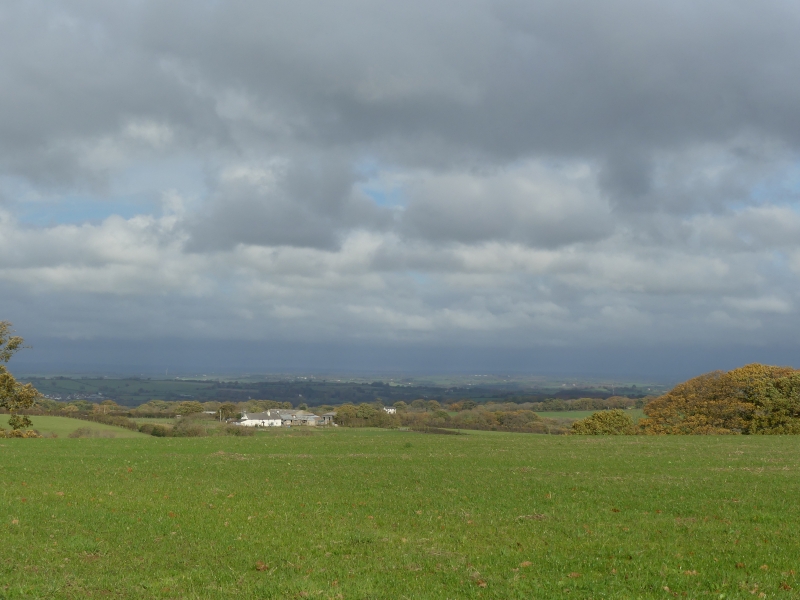 Farmhouse. C16 origins, C17 and early C18 improvements, modernised and rearranged
in the mid-late C19. Plastered cob on stone rubble footings; stone rubble stacks
with plastered brick tops, the hall one maybe with a granite ashlar chimneyshaft;
slate roof, formerly thatch.
Plan and development: originally a 3-room-and-through-passage plan house, extended
to 4 rooms in the C18, facing south. At the left (west) end is a parlour with a
gable-end stack. This is the fourth room added on the end of the small inner room
parlour. Hall has an axial stack backing onto the former passage and at the right
(east) end is a service end kitchen with a projecting gable-end stack. In the C19
the kitchen was refurbished and the lower passage screen was removed. At the same
time a passage was inserted through the upper end of the hall to new stair turret
projecting to rear. The original house was an open hall house heated by an open
hearth fire. The hall fireplace was probably inserted in the late C16 and the house
progressively floored over in the late C16 and C17. Nevertheless the present house
is mostly the result of major early C18 and mid-late C19 refurbishments. It is 2
storeys.
Exterior: irregular 5-window front of C20 casements with glazing bars. The
original passage front doorway is towards the right end. The new main front doorway
is roughly central. Both contain mid - late 019 plank doors, the latter behind a
C20 gabled porch. The roof is gable-ended.
Interior: the kitchen appears to be a complete C19 rebuild with crossbeams and
brick-lined fireplace of that date. The hall fireplace is blocked although its
large size is evident and the fireplace and its oak lintel are intact according to
the owner. The crossbeam is soffit-chamfered with runout stops. The rear wall
contains an attractive C18 cupboard with curving back, shaped shelves and a fielded
nowy-headed door. At the upper end of the hall (now beyond the C19 passage) is a
C16 oak plank-and-muntin screen and this was moved a short distance into the inner
room circa 1980. No carpentry detail is exposed in the former dairy or parlour and
the parlour fireplace is blocked by a C20 grate. C19 stick baluster main stair.
Most of the roof is early C18 and carried on A-frame trusses with pegged lap-jointed
collars. The roof over the hall however is earlier and includes an early C16 face-
pegged jointed cruck truss which is smoke-blackened from the open hearth fire.