Bush House, Including Garden Walls Adjoining to the South-East and South-West 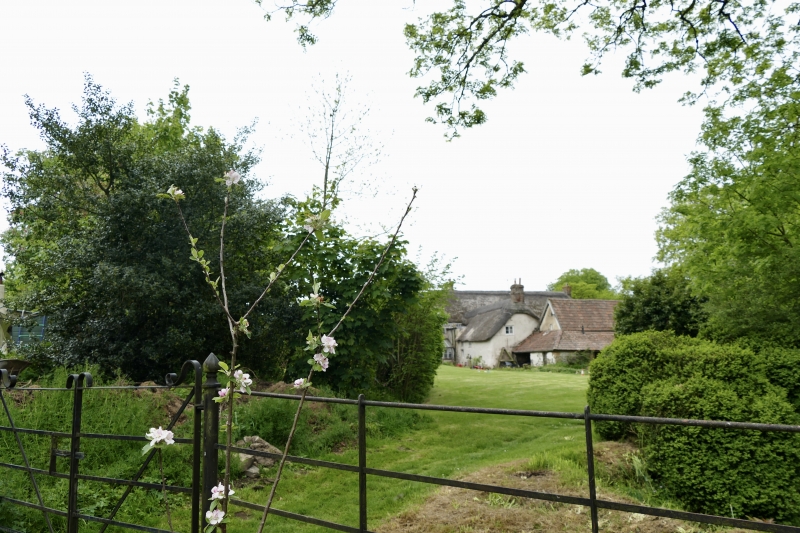 Entry Name: Bush House, Including Garden Walls Adjoining to the South-East and South-West

1/279 Bush House, including garden
walls adjoining to the south-east
22.2.67 and south-west
GV II

House, former farmhouse. The plan suggests C15 or C16 origins but the earliest
datable fabric is early-mid C17, kitchen wing added in mid-late C17, major late C17-
early C18 refurbishment, modernised in the early C19 and again circa 1920, this last
one including Queen Anne style joinery detail by Dart and Francis. Plastered cob on
stone rubble footings, cob stacks topped with C19 brick; thatch roof.
Plan and development: T-plan building. The main block faces south-west and it has
a 3-room-and-through-passage plan. The inner room at the left (north-west) end has
a gable-end stack. Large hall has an axial stack backing onto the passage and the
service end room at the right end has a gable-end stack. Former 2-room plan kitchen
block projecting at right angles to rear of the hall, the second room with a large
gable-end kitchen block. The main block was reroofed and refurbished in the late
C17-early C18 and therefore there is no evidence of the historic development of the
house. The earliest features are in the hall and they are early-mid C17. The
kitchen block is wholy mid-late C17. The house was rearranged a little in the early
C19. At this time the former service end room was rebuilt as a parlour and a
service hall added behind. It was probably at this time that a main stair was built
blocking the back of the- passage but this was rebuilt circa 1920. 2 storeys
throughout.
Exterior: regular but not symmetrical 5-window front of early C19 16-pane sashes.
However a garden wall projecting forward divides the fenestration into a 2 and 3-
window section. Then the right 3-window section is symmetrical about the passage
front doorway which contains an early C19 6-panel door with panelled reveals and a
flat-roofed Doric porch. Main roof is gable-ended. The rear block includes a
couple of oak-mullioned casements containing rectangular panes of leaded glass at
first floor level; these may be as early as the late C17. Eaves on the north-west
side (to the rear courtyard) is carried down over a pent roof.
Interior: early-mid C17 features in the hall, namely a stone rubble fireplace
(partly relined with brick) and an oak lintel given an ovolo moulding and bar run-
out stops, and the 2 crossbeams are soffit-chamfered and one has step stops. The
mid-late C17 kitchen block has plain soffit-chamfered ceiling beams and the large
fireplace has a soffit-chamfered and scroll-stopped oak lintel and contains a large
blocked oven. The floor here is cobbled. Service end parlour has early C19
carpentry. Roof throughout of A-frame trusses with pegged lap-jointed collars but
those of the main block are augmented with blacksmiths nails. Great deal of late
C17 - early C18 and early C19 joinery detail throughout.
A low granite stone rubble wall projects forward from the front. It has rounded
granite ashlar coping and there is a stone mounting block on the outside. To left
(south-west) of the house the garden is enclosed by a high plastered cob wall with
thatched coping, much of it replaced by brick along the front.
Bush House is attractive and also forms a group with its courtyard of thatched
farmbuildings.