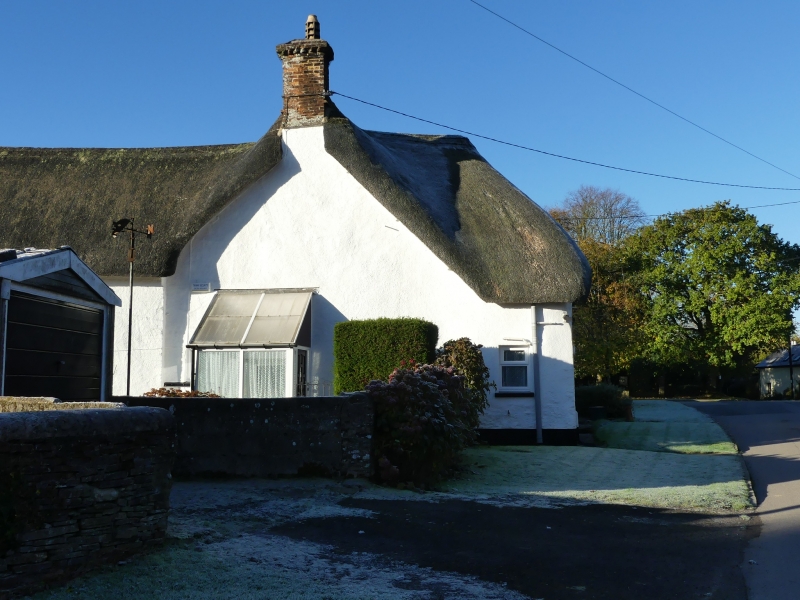 A range of cottages comprising Bush Cottage and Bargains Cottage, with elements dating from the C18 (possibly earlier) with alterations and extensions in the C19 and C20.

MATERIALS: The range of buildings is predominantly built of cob and is clad in render. Bush Cottage has a thatched roof and Bargains Cottage has a slate roof.

PLAN: The range of cottages is 'L'-shaped and set back from the road. To the east, Bush Cottage has a projecting south gable whereas Bargains Cottage has a simple rectangular plan aligned east-west.

EXTERIOR: Bush Cottage is a two-storey thatched property which is accessed via a porched entrance within the east elevation. The projecting north gable of Bush Cottage has an asymmetrical façade containing one metal-framed casement on the ground-floor and two timber three-light casements on the first-floor. The rear (south) elevation and the southern gable have metal framed casements.

INTERIOR: Internally, Bargains Cottage contains a large central brick and cob stack with a bread oven within the north corner. Timber stairs are located to the north with the central bay of this property and gives access to two rooms at first-floor level which are separated by the central stack.

The original roof structure which would have held the thatch survives beneath the current roof structure and is formed with a hip to the west. No internal inspection was possible for Bush Cottage.

HISTORY: Bush Cottage appears to be one end of a former larger cross-wing house which has been truncated and subsequently extended. The attached later extension, known as Bargains Barn, does not possess special interest.

REASONS FOR DESIGNATION
Bush Cottage and Bargains Cottage are designated at Grade II, for the following principal reasons:


This text is from the original listing, and may not necessarily reflect the current setting of the building.