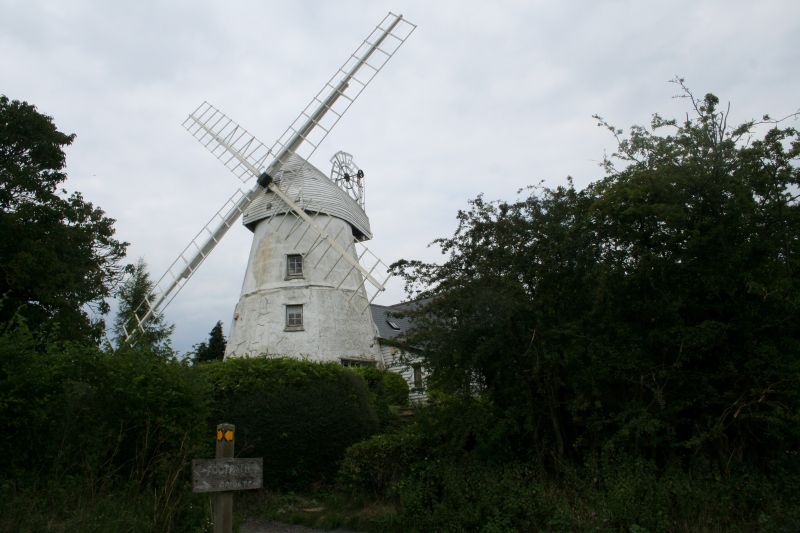 Tower windmill, now a dwelling. Early C18, converted 1934. Plastered red
brick, boarded cap. Built in 2 stages, originally octagonal to a height of 6.10
metres, later raised to 9.77 metres, reducing to a circular plan. Wall
thickness 1.20 metres at the base. Single-storey domestic extension to NE, of
plastered brick with shingled roof. 4 floors with C20 casements on each. Boat-
shaped cap, stocks and skeleton sails, fantail gear without fantail. Height
overall 13.44 metres. Farries finds the earliest documentary evidence of it in
1707, and concludes that it was built after the great storm of 1703, which
destroyed many mills, as an experimental tower mill with exceptionally massive
walls, completed soon after the sieges of Gibraltar, 1704-5. It was not
successful commercially, and was converted to a cottage, with an inserted stack
in the wall. It was converted back to a mill in 1754 and raised to its present
height. It was derelict 1899-1904 after storm damage and was then equipped with
the present fantail gear. It had one pair of stones. Some of the equipment
remains in situ. (K.G. Farries, Essex Windmills, Millers and Millwrights, vol.
3, 1984, 24-7). . .. . . .