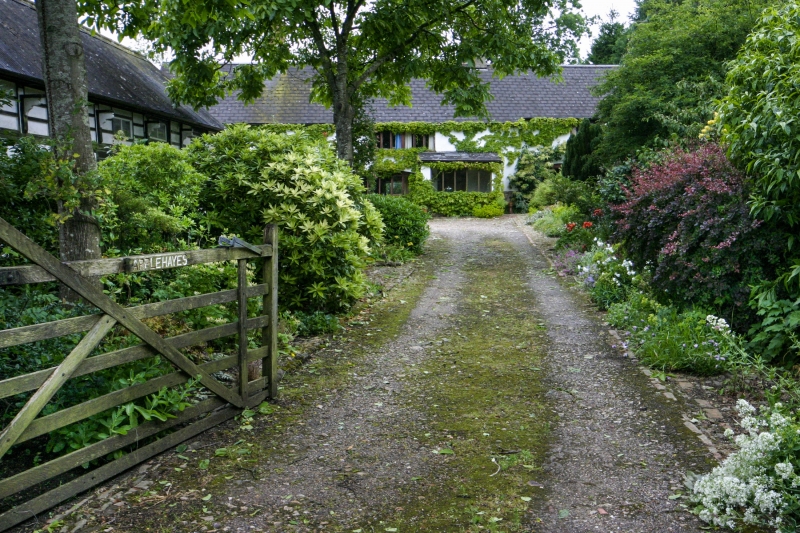 ST 11 NE CLAYHIDON APPLEHAYES LANE
2/18 Applehayes Farmhouse
-
- II
Farmhouse. C16 with C17 and later alterations. Roughcast random rubble chert;
gable end roof with asbestos tiles. A 4-room, through-passage plan house; the
service end is to the left of the passage, and the fourth room beyond this may have
been added to the more usual 3 room plan in the C17 when the rear wall was rebuilt
(see Commander William's report, dated February 1983). The charring of the roof
timbers in a recent fire make it impossible to determine whether or not the roof was
originally smoke-blackened. There is a wing to the rear of the hall. Service end
room and fourth room share the same axial stack; hall stack backs onto passage. End
stack to wing. Recent end stack to previously unheated inner room. Brick shafts
throughout, although the axial (hall) stack is largely of stone with weathering
visible. Stairs to rear of hall, and front of service room. 2 storeys.
Exterior Front: irregular fenestration; two 6-light C20 timber casement windows to
first floor; ground floor with one C19 casement window to left-hand room; otherwise
all windows C20. Glazed porch. Rear with leantos; some C19 casement windows to the
wing, otherwise C20.
Interior: The partition between hall and inner room has been removed; axial ceiling
beam to inner room; chamfered cross ceiling beams with scroll stops to hall (that
marking division between the 2 rooms chamfered to hall side only). Hall fireplace
(like the service room fireplace) has chamfered posts instead of jambs, with half
pyramid stops, which is an unusual feature. Plank and muntin screen between passage
and service room, the chamfered muntins with scroll stops, those to the service room
side set high to allow for a bench, now removed. The fourth room (now heated) may
originally have been a granary; above the side oven there may have been a drying
kiln (cf Shepherd's farmhouse, q.v.).
Roof: probably C18 pegged timbers; between the service room and the outer fourth
room are the remains of a jointed cruck. Commander Williams believed this to be
face-pegged, but recent cleaning has revealed side pegs, and the face pegging is
clearly repair work. Severe charring of this truss makes dating impossible.
Historical note. Applehayes was for a time a country retreat for members of the
Camden Town School of painters, who produced many studies of local places.