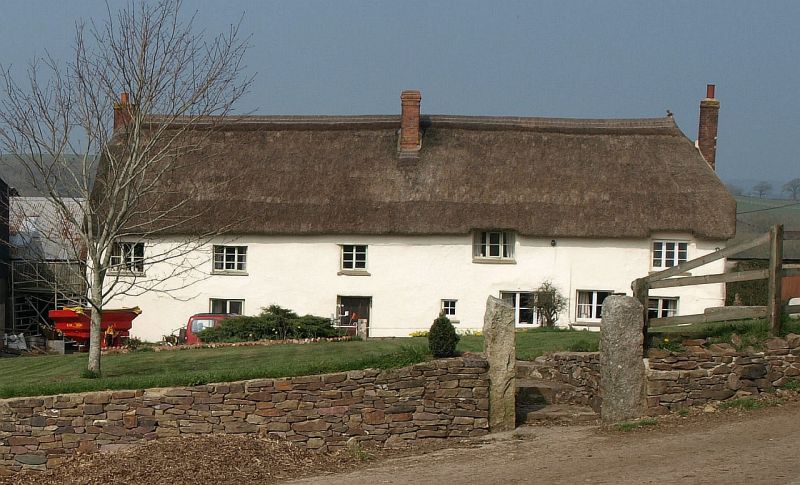 Farmhouse. Probably late C14-early C15, with major C16 and C17 improvements.
Plastered cob on rubble footings; stone rubble and cob stacks topped with C19 and
C20 brick; thatch roof.
3-room-and-through-passage plan house facing south-east with inner room at right
(north-east) end. Rear passage door is now blocked. Inner room has end stack,
hall has axial stack backing onto passage, and front lateral stack to service end
room. C19 and C20 outshots to rear. 2 storeys.
Irregular 5-window front of late C19 and C20 casements, all except 2 with glazing
bars. Front passage doorway left of centre now contains C20 door behind
contemporary porch with monopitch roof of corrugated plastic. Roof is gable-ended
to left and hipped to right.
Interior: the ground and first floors show mainly the results of C19 and C20
modernisations but the survival of the late medieval layout suggests that many C16
and C17 or earlier features may survive behind later plaster. No beams are exposed
and the fireplaces are blocked by C20 grates. A C17 oak plank-and-muntin screen
with chamfered and scroll stopped muntins shows on the hall side of the passage to
rear of the cob chimney stack. Another section of an oak plank-and-muntin screen,
this one probably C16 with chamfered and step stopped muntins, has been reset to
partition the service room. At the upper end of the hall a wide gap has been made
through the timber-framed wall there to the inner room. The soffit of a rail has
been exposed showing the mortises of close-set studs suggesting that the crosswall
is late C16-early C17.
The roof is accessible and of considerable interest. The roof over the inner room,
hall and passage is original and probably late C14-early C15 work. It is virtually
intact and most impressive. 3 trusses survive. They are true crucks of enormous
scantling. They comprise squared tree trunks approximately 400-450mm square and in
places bend as they follow the grain of the trees. All have cambered collars with
soffit chamfers and central bosses comprising simple cylinder shapes with flat
soffits. They are mortised, tenoned and pegged to the principals which reduce in
width above. The 2 trusses over the hall and passage have yokes to carry the
massive square-set ridge (Alcock's apex type H) whilst that truss over the hall-
inner room partition has a large saddle (Alcock's apex type C). At the inner room
end the ridge is still carried on the original hip cruck and there is a curving
brace between the junction of the two pieces. Only 1 set of trenched purlins
appear although there may be a second set at wall plate level. The whole roof
including the original common rafters and underside of rye thatch is very heavily
smoke-blackened indicating that the original house was open to the roof, heated by
an open hearth fire, and divided by low partitions.
Remarkably the original smoke louvressurvives insitu and virtually complete. It is
built on top of the ridge over the hall. It is approximately 1 metre long and
rises approximately 0.4 metres. It is gable-ended on the same axis as the main
roof. The ends are made of oak boards with the edges fashioned to accommodate a
pitched roof of louvered boards most of which survive. It owes its survival to the
insertion of the hall stack alongside after which the thatch was simply carried
over the top of louvre to the chimney shaft.
Over the service end is a C17 roof truss. The lower parts of the principals are
now boxed into a first floor partition but the collar is pegged and lap-jointed
with dovetail halvings.
East Leigh Barton is a well-preserved late medieval farmhouse with an impressive
and unusual roof. The only other of similar contruction and scantling in Devon
known to the writer is at Lower Chimsworthy, Bratton Clovelly. It is however the
surviving smoke louvre which is the most important feature. It may well by a
unique survival.