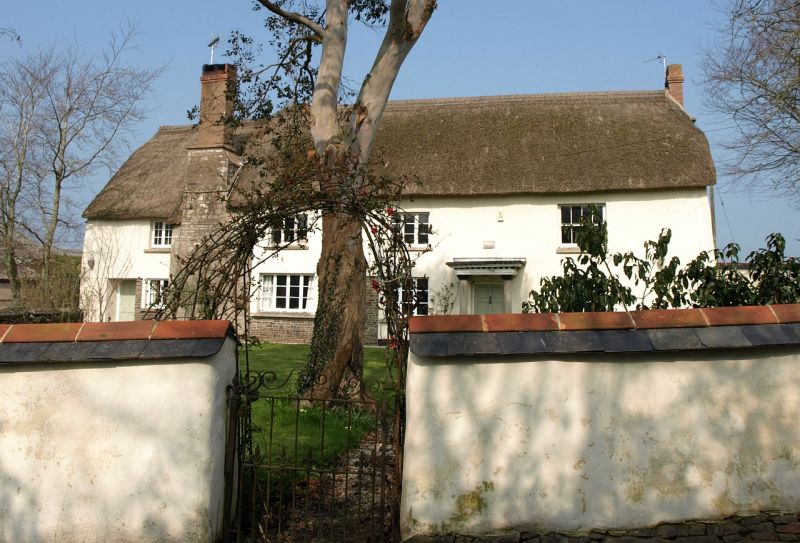 House, former farmhouse. Late C16, possibly earlier core; major C17 improvements,
alterations and extensions associated with stone plaques dated 1664 and 1678;
modernised in mid C19. Mostly plastered cob on rubble footings but stone rubble
exposed to first floor level in front of hall, cob exposed to rear of late C17 main
block and stair block of exposed stone rubble with some cob; exposed stacks of
neatly-squared blocks of local mudstone topped with C20 brick; thatch roof and
corrugated asbestos to stair block.
House faces south. The original core occupies the centre and left (west) end of
the main block and is derived from a 3-room-and-through-passage plan house. The
through passage is now at the left end since the service end room has been
demolished. Hall has slightly projecting front lateral stack. Probably early C17
kitchen block at right angles to rear of hall with end stack and oven projection.
In the late C17 the inner room was rebuilt with a stair block projecting to rear
and another room added onto right (east) end with end stack. At this time the main
entrance moved to front of former inner room which was given a lobby and converted
to an entrance hall. C20 glass-walled outshot to rear of passage in the angle of
the main block and kitchen.
Balanced but asymmetrical 4-window front comprising a variety of mid C19 and C20
casements with glazing bars and, at the right end, late C19 horned 8-pane sashes.
Main door is right of centre; a mid C19 6-panel door with contemporary flat-roofed
porch with circular section granite columns with plain caps and unusual moulded
entablature including a modillion frieze. Above the porch a small sandstone plaque
is inscribed '1K 1664'. Another set in the right end stack is inscribed '1K 1678'.
There is a second mid C19 6-panel door at the left end of front to the through
passage. The hall stack has its original rubble chimney shaft, now plastered and
extended with C20 brick. The roof is gable-ended, as too is the rear kitchen
block. Rear also includes late C19 and C20 casements with glazing bars and the
stair block has a large C19 2-light casement with glazing bars. The rear passage
doorway is late C16-early C17; an oak doorframe with flat-arched head and
chamfered surround, the stops have worn away. It contains a contemporary plank
door with plain strap hinges and enriched with a star pattern of nail heads. It
preserves the original oak lock housing.
Good Interior: the through passage has a pitched cobble floor. The passage-hall
partition is a late C16-early C17 oak plank-and-muntin screen; the muntins are
chamfered with late step stops, there is an ovolo-moulded cornice on the passage
side, and it contains a flat-arched doorway. The large hall fireplace of about the
same date is built of neatly squared mudstone blocks with a soffit-chamfered oak
lintel and includes an inserted cloam oven. The 3-bay ceiling is carried on late
C16-early Cl7 crossbeams, soffit-chamfered with step stops, although the half beam
against the cob crosswall at the upper end appears to be a mid C17 replacement; it
is soffit-chamfered with bar-runout stops. Part of the floor at the upper end is
of pitched cobbles. Another oak flat-arched doorframe with chamfered surround and
step stops leads from hall to kitchen. The kitchen has plain axial beam and a
large rubble fireplace with plain oak lintel and inserted or relined late C19 oven.
The entrance hall, the former inner room, has a late C16-early C17 crossbeam,
mutilated but soffit-chamfered with step stops. The doors to the hall and entrance
lobby are late C17 fielded panel doors hung on early H-hinges. The end room was
refurbished in the late C19 and no earlier features show. The stairs were replaced
at the same time.
On the first floor the chambers over the hall and passage show mostly late C16-
early C17 features. They are separated by an oak-framed close-studded closed truss
which includes a flat-arched doorway with chamfered surround and step stops. An
early C17 oak plank-and-muntin screen, its muntins chamfered with scroll stops, is
now used to line the end wall. Both the closed truss and the open truss over the
hall chamber are side-pegged jointed cruck trusses. They are not smoke-blackened.
The doorway through the cob crosswall at upper end of hall chamber has early C17
chamfered and scroll-stopped oak frame. The rest of the roof of the main block has
been altered but most appears to be C17 carpentry and towards the east end is an
apparently early C17 A-frame truss with pegged dovetail lap-jointed collar with 2
sets of threaded purlins. The kitchen roof is probably late C17 comprising tall A-
frame trusses with pegged lap-jointed collars.
The front garden is enclosed by a C19 low rubble wall with C20 concrete coping to
west and cob with slate and corrugated asbestos coping to south and east.
Until 1921 the house was in the occupation of the Kingdom family according to the
present owner.