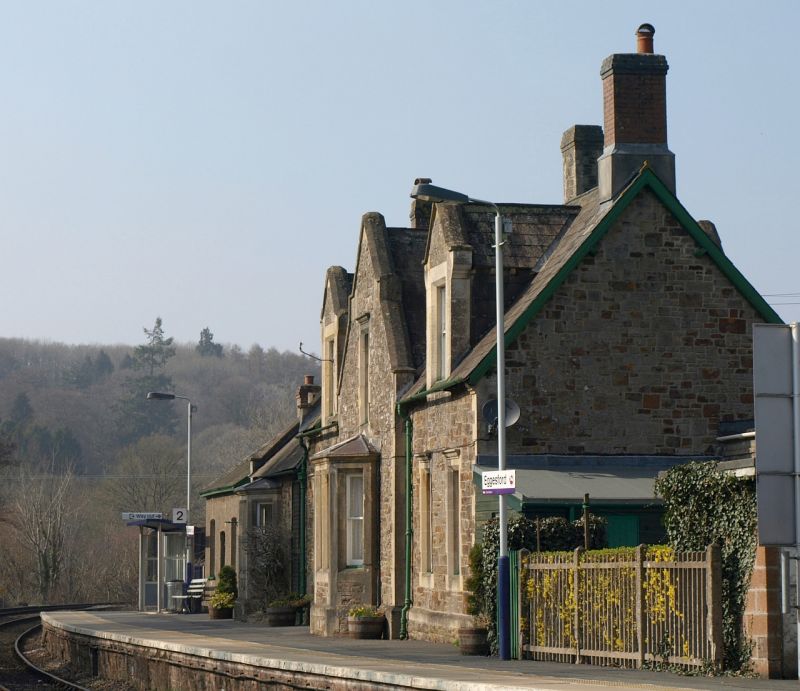 Double-fronted building, the northeast front onto the main Exeter-Barnstaple road and the southwest front onto the railway platform. From the railway side the plan comprises the waiting room and luggage/parcel store at the left (northwest) end. The waiting room has an end stack. In the centre is the ticket office under a higher roofline. To right of this a through passage separates the ticket office from the station-master's house, a two-room crosswing projecting slightly forward and rear and with an axial stack. A third room to the house was added circa 1890 to the house at the right (southeast) end on the axis of the main block and served by an end stack. The house and ticket office are two storeys, the luggage/parcel office and waiting room are single storey. Restrained Tudor Gothic style throughout. Both fronts have unified but deliberately asymetrical arrangements. All the roofs are gable-ended and all except the extension have shaped kneelers and coping enlivened by a single step. All the windows and doorways have chamfered ashlar reveals and soffit-moulded floating cornices over, including those of the extension. The north-east front onto the road has a 2:1:1:2-window front. Only the gable end of the house has a first floor window. Immediately to right of the house the entrance to the passage has a projecting gabled porch with its outer Tudor arch surmounted by an ashlar plaque bearing a bas-relief heraldic achievement. The southwest front onto the platform has a 1:1:1:2-window arrangement and both the waiting room and original part of the house have canted bay windows. The extension has a first floor gabled dormer and another over the ticket office was put there circa 1890. Most windows contain sashes; some are horned and most have glazing bars.

Source: R.A.Williams, The London and South-Western Railway, Vol.2 (1973). Plate 14 shows the station before the extension was built.