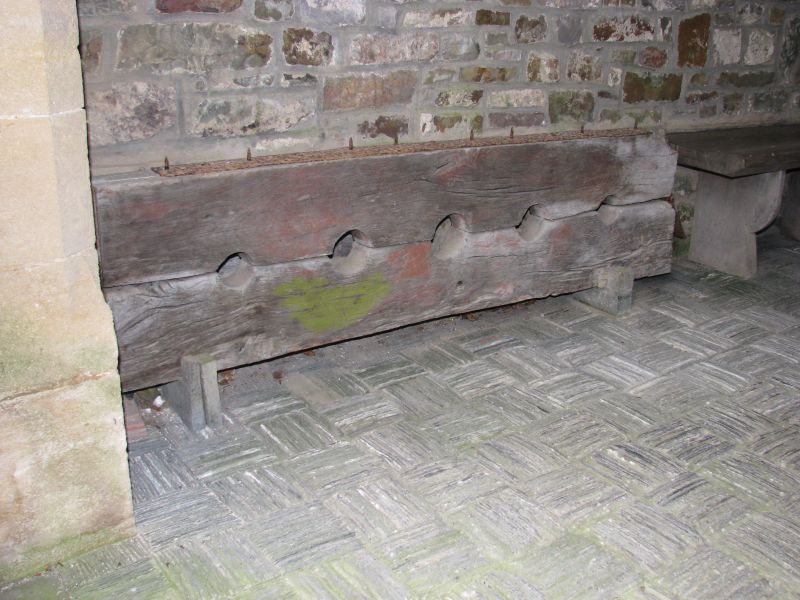 Parish church. Thoroughly rebuilt 1889-92 by St Aubyn and Wadling for the Reverend
Henry Grainger Southcomb. The surviving medieval fabric is the tower, possibly C14,
and the C15 or early C16 north aisle. Slatestone rubble with a slate roof with
pierced C19 ridge tiles, freestone dressings.
Plan: Nave and chancel (no external division); 4-bay north aisle (1 bay to the
chancel); west tower; south porch; north-east vestry. Perpendicular style. In 1882
the church was described by the Archdeacon of Barnstaple as "perhaps the most
dilapidated and most unsightly in its interior of all in the deanery". The late C19
restoration and late C19/early C20 fittings were almost all paid for by the Southcomb
family who were rectors (and mostly squarsons) for 270 years until 1945.
Exterior: Snecked chancel with a datestone of 1892 and the text "Laus Deo" on the
east wall. 3-light late C19 Perpendicular traceried east window with 2 smaller 2-
light C19 Perpendicular south windows. The nave has 2 3-light late C19 Perpendicular
traceried windows, one on either side of the south porch. The late C19 porch has a
double-chamfered outer doorway with a hood mould and a 2-leaf C19 outer door with a
metal grille and ornamental strap hinges. The north aisle has 3 square-headed north
windows with Tudor arched lights and 3-light Perpendicular west and east windows.
The north-east vestry has a 3-centred chamfered stone doorframe and a 3-light west
window with ogee-headed lights in a square-headed frame and a chimney on the north
wall with an octagonal stone shaft. 2-stage battlemented west tower, difficult to
date but possibly pre-Perpendicular, with diagonal buttresses to the west. The west
doorway has a crude rounded chamfered doorframe and a late C19 door with Art Nouveau
strap hinges. The 3-light west window has renewed uncusped intersecting tracery; 2-
light traceried belfry openings on all 4 faces, unglazed slit window on south face.
Interior: The interior of the porch has a C19 arch braced roof, a floor of slates
laid on end and a C19 4-centred moulded inner doorframe with a 2-leaf inner door of
1935. The village stocks are kept in the porch. The interior of the church has
plastered walls (except for the tower); a late C19 timber chancel arch on stone
corbels and a plain, rounded tower arch. 4-bay Perpendicular arcade with capitals to
the shafts of the piers only. Late C19 unceiled wagon with carved bosses and
moulded ribs to the north aisle. The major pre C19 fitting in the church is the
splendid 1618 screen to the north aisle and the matching parclose. The lower part of
the screen consists of a plank and muntin dado with shallow carving and carved scroll
stops below a rail carved with intersecting round-headed arches and a balustrade of
bobbin-turned balusters flanking a round-headed doorway into the east end of the
aisle. The parclose has a similar doorway into the chancel, both doorways crowned
with pediments painted with the armorial bearings of James I, Ann of Denmark his
wife, and Charles Stuart when prince. The frieze has a painted text from the
Coverdale Bible. The letters IVIM also appear on the screen, W.H. Wilkin suggests
that they stand for Johannis Venner in Memoriam and that the screen was erected to
commemorate the Reverend John Venner, died 1618.
The chancel has a C20 stone reredos with blind tracery in a crested stone frame; late
C17/early C18 communion rails with alternating twisted and reeded balusters. Choir
stalls with a memorial date of 1896 with traceried frontals and carved bench ends.
The nave has 1893 carved bench ends on the local C16 pattern and a co-eval tower
screen. The open traceried timber drum pulpit is also 1893, the font is probably
also late C19, a square bowl on a scalloped base with cylindrical stem.
Stained glass Chancel east window with a memorial date of 1892 probably by Drake of
Exeter; south window with memorial date of 1909 by Hardman.
Memorials 2 C17 slate memorials to members of the Southcomb family on the north wall;
late C19 brass to James Schoolbred, died 1892; in the aisle an odd memorial
commemorating John Davy, "14 years provincial grand mark master mason of Devonshire,
d. A.D. 1887", AL 5887, signed W.P. Cooper Union Street, Plymouth. John Davy owned
Rose Ash House (q.v.).