A Grade I Listed Building in Duffield, Derbyshire 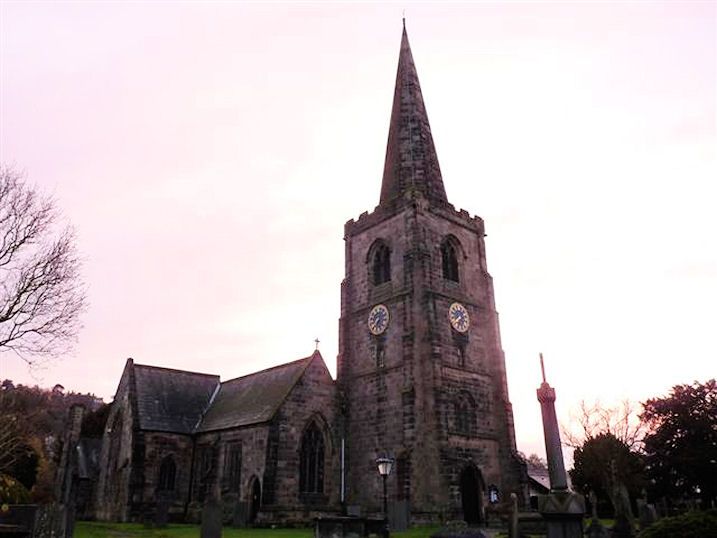 Early C14 tower of three stages, four to west, divided by chamfered string courses. Angle buttresses with five set-offs, with pilaster strips linking them to the battlemented parapet. The north and south sides have a trefoiled lancet to the middle stage, clock face above, and two-light bell-openings with cusped Y-tracery. The west side has a doorway with roll moulding and hoodmould, a two-light window above almost round-arched, with cusped ogee tracery, and then as the north and south sides. The east side has similar bell-openings. Recessed octagonal stone spire. Weather cock, 1719 by Robert Bakewell.

The south aisle east and west windows are Decorated style of 1847, when the roof was given its steep pitch. Shallow gabled south porch with plain parapet. Double chamfered doorway with moulded capitals and chamfered hoodmould. Single rectangular window to west, two-light chamfered mullion window to east. Diagonal buttresses. To the right a C19 three-light window with flat head and cusped ogee lights.

North transept has to east a window with Y-tracery, to north a window of three stepped lancets and to west a two-light Decorated window. North aisle with steeply pitched roof, raised in 1847. To the north are two three-light windows of cusped ogee lights under a flat arch. Doorway with wave moulding. West window with Decorated style tracery.

MONUMENTS: three C18 wall tablets in the south aisle and another in the north aisle. In the north chapel an unusual monument to Anthony Bradshaw, died 1614, the monument set up in 1600. A frieze divides the substructure with rusticated pillars and inscription tablets from the superstructure also with rusticated pillars. On top are inscription plate and obelisks and achievement. On the frieze incised demi-figures of husband in the middle, two wives at the outer corners, and twenty children between, four sons on the left of the father and sixteen daughters in two tiers to the right. All the figures have their initials to the left and right of their heads. In the north east chapel a monument to Sir Roger Mynors, died 1539, and his wife. Alabaster effigies on a tomb chest with saints in round-arched cusped panels. A number of C18 and C19 tablets in the chancel. Low ogee tomb recess to chancel north.

Chancel furnishings, panelling, reredos, choir stalls, rood screen, all by Scott, as are the chapel screens and the pulpit. Stained glass in the chancel windows, may be by Kempe. Panelled octagonal font, possible C17.