Garden Walls, Piers, Statues, and Steps to the South of Renishaw Hall 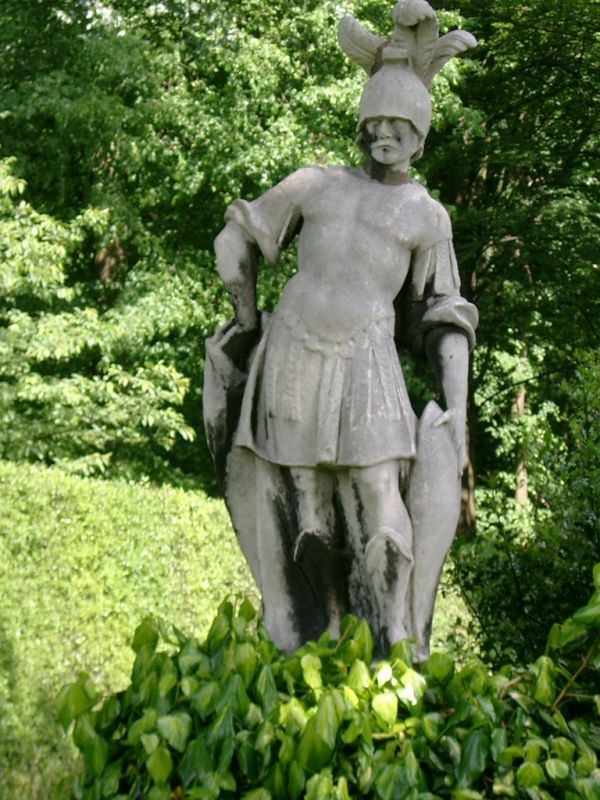 PARISH OF ECKINGTON RENISHAW PARK
SK 4378
12/105
Garden walls, piers,
statues, and steps
to the south of
Renishaw Hall
GV II
Garden walls, steps, statues and fountains in formal garden laid
out from 1879 by Sir George Sitwell. Walls and steps of ashlar
coal measures sandstone, retaining and linking three different
garden levels. The lowest flight of steps, at the south end of
the garden are of limestone. The retaining wall to the first
level. 55 metres to the south of Renishaw Hall incorporates
three flights of steps, those to the west end dog-legged, and
with square piers supporting ball-finials. The-principal flight
lies on the central axis to the garden, with the steps linking
the first and second levels, and becoming wider as they descend.
The wall is terminated at the steps of low ashlar piers, square
on plan. The piers support full size statues of Neptune and
Diana, each with accompanying dog. The third flight of steps is
wholly contained within the upper level, with return walls
flanking the steps. At the head of the steps, two further low
piers, each supporting a narrow obelisk standing on a square
base. The retaining wall is 2 metres high, and is divided into
twelve bays by shallow pilasters. The wall rises from a moulded
plinth and has a moulded flat coping. The wall is terminated at
its eastern end by a square ashlar pier, which supports a white
marble status of a male. A lower wall continues to the east,
with a further two sets of steps, the north easterly set
terminating in low piers carrying tall obeliskes, with acorn
finials. To the west side of the second level, and adjoining
the upper wall, a buttressed retaining wall supports an earlier
terrace. The wall has eight shallow stepped buttresses, and
plain chamfered coping. Mid-way along the coping, a full-size
classical bust of a male, set on a low tapered pedestal. Rising
from the southern end of the retaining wall, a plain flight of
steps, with two free-standing marble Corinthian capitals at the
top. The southern end of the wall is linked to the retaining
wall of the second garden level, which is one metre high, and
with a plain coping, running parallel to the upper wall. An off
centre flight of semi-circular steps link the second and the
third levels and has a decorative circular paved area at its
upper level. The steps and paving have been attributed to Sir
Edwin Lutyens. As the junction of sandstone retaining wall,
and the limestone steps are low square ashlar limestone piers,
square on plan, each supporting full-size marble statue, known
together as 'the two Giants'. The garden at Renishaw is
included in the Gardens Register for Derbyshire at Grade ,
item no.