A Grade I Listed Building in Norbury and Roston, Derbyshire 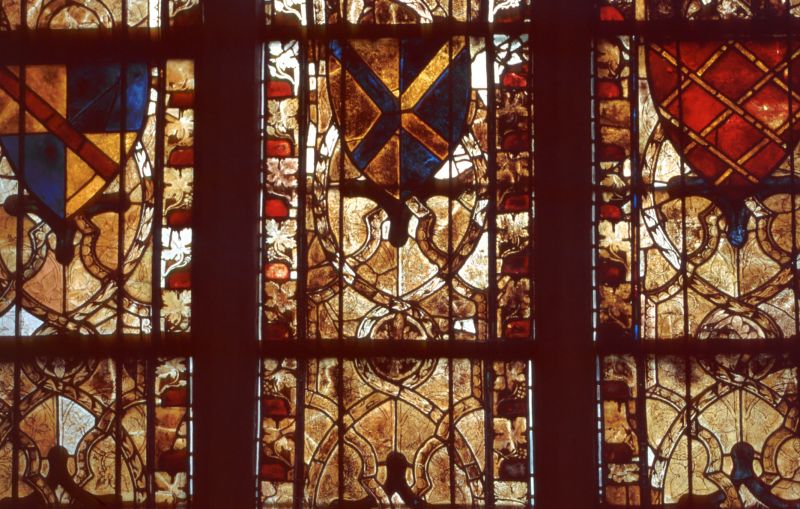 GV
I
Parish church. C12, early C14, mid C15, restored 1841 and 1899. Ashlar sandstone with leaded roofs. Chancel and tower have plinths with moulded copings, and all south elevation has moulded stringcourses at eaves level with castellated parapets over, those to the chancel of odd wavy design and those to nave and chapels with ridgeback copings, whilst tower has simple chamfered castellations, C15 three bay clerestoried nave, aisled to north and with early C15 two stage tower to centre of south side flanked by C15 chapels, and large four bay early C14 chancel.

Beyond to east early C14 chancel has four, chamfered three-light pointed windows with hoodmoulds and extraordinary intersecting and reticulated tracery with stylised flowers at meeting point of ribs near tops. Between windows and to either end, thin, deep buttresses with small pinnacles to tops. The windows have a continuous sill band below and above is a moulded stringcourse. East window similar to northern ones except it has a moulded edge and it is five-light with three incongruous uprights. Eastern corners of chancel have gableted angle buttresses. South chancel elevation similar to north one except for small wavy headed doorcase, with elaborate foliage type ironwork to door, below second window from east.

To west south east chapel has similar cusped three-light segment headed window as on west wall of nave. Similar window to south side of chapel between stepped buttresses, and to south in south west chapel. Central two stage tower between has stepped full height buttresses to three sides, set some distance in from the corners. South front has pointed, moulded doorcase with returned hood and above a small ogee headed niche. Above again a small ogee headed lancet partly covered to top by clockface. Two-light, louvred cusped Y-tracery bell opening in four-centred arched deep recess above, to all sides. Moulded stringcourse with central gargoyles and embattled parapets with corner pinnacles above.

To either side of tower clerestory has single three-light flat headed windows with cusped lights, incised spandrels and returned hoodmould with carved labelstops.

Interior has four bay C15 north arcade with octagonal piers, moulded capitals and double chamfered arches; single arches through to southern chapels have similar arches and capitals on polygonal responds. Central doorcase into tower has four-centred arched head and is deeply moulded to south side, to west is a small pointed doorcase to staircase. Nave and chancel roofs, Perpendicular with moulded tie beams and central bosses with small ribs between also with carved bosses. Aisle roof C19 copy.

Chancel is particularly fine, the north and south windows have pointed blind arcading below, similar stylised flowers in same position on the tracery as on exterior and between the windows are thin triangular sectioned pilasters which finish to top in moulded corbels, possibly suggesting a stone vault was intended. The east wall has C19 cusped wooden panelling below the windows and C20 stone altar to front. To south wall is an original piscina with two small corbelled out bowls set in small niche. West end of chancel has C19 rood screen but no chancel arch. Choir stalls have foliage poppy heads and arcaded Perpendicular panelling to fronts, much restored.

Two excellent alabaster table tombs to centre of chancel, one to Nicholas Fitzherbert who died 1473 and one to Ralph and Elizabeth Fitzherbert who died 1483 and 1491. Both have mourning figures to sides, set in crocketed ogee headed niches with crocketed pilasters between, and both have the knights in armour with their feet on lions, although there is an extra little figure holding a rosary on the back of Ralph Fitzherbert's lion. The double tomb also has angels holding shields to west side.

The floor of the chancel also has several monuments including marble slab with incised figure in a shroud and Latin inscription to edge, and a similar one with figure of a priest under an ogee headed arch. To centre of the floor there is a mid C16 family slab with brass plates of donors, their daughters and an inscription. There are also several mid C18 slate slabs and one of 1653 to Anne Fitzherbert.

All chancel windows have large quantity of early C14 glass, the side windows have lozenge patterned glass incorporating stained glass shields, whilst east window, which has been restored, has coats of arms to top and panels with figures of saints etc set in plain glass surrounds. South east chapel also has two fine stained glass windows depicting donors with their coats of arms under architectural canopies, both C15.

This chapel also has a small C15 cusped piscina to south wall and an early C14 table tomb of Henry Fitzherbert. Pulpit to north in the nave is C19, and font to west is C14 with circular bowl on keeled shafts. The nave also contains two C9 cross shafts with interlace carving and two table tombs, one of sandstone, the other of marble to a Fitzherbert. The west window also has a fragment of C16 stained glass. North aisle has another cusped piscina to east side, and several wall memorials to north side including two good classical ones, of 1742 to Thomas Bowyer and 1785 to Simon and Elizabeth Bowyer.