A Grade I Listed Building in Youlgreave, Derbyshire 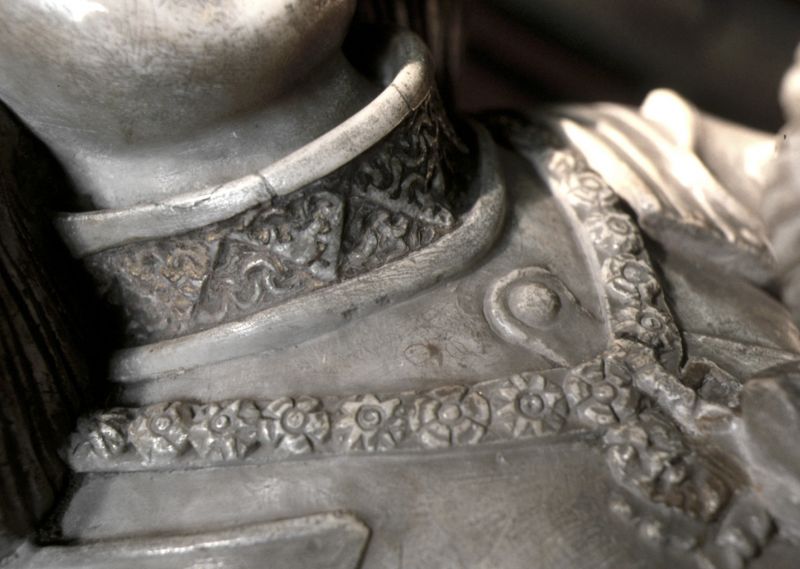 PARISH OF YOULGREAVE
ALPORT LANE (south side)
Church of All Saints

West tower has full-height stepped angle buttresses to all sides and deeply moulded Perpendicular west doorcase with hoodmould and C19 doors: Large Perpendicular three-light panel-traceried window above with hoodmould and rosettes to either side of the stops, tracery restored in C19. Moulded string course over with two-light chamfered mullion windows with hoodmoulds above to all sides. To south side of tower in the eastern corner, a polygonal staircase turret up to the second stage, broached to base and topped with embattled parapets. Second stage has clockface to west side, dated 1870, with pairs of pointed and moulded, louvred bell openings with cusped tracery and continuous sill band and hoodmoulds, above. Coved cornice with central and corner gargoyles over, topped by embattled parapets with corner and central crocketed pinnacles.

Chancel to east has C19 pointed, three-light window with cusped stepped lights, and beyond buttress to east, a deeply recessed, flat-headed panel tracery window. Perpendicular, five-light east window with panel tracery, restored in C19, with hoodmould over and lower sections of window blocked in stone, has diagonal buttresses to either side. South chancel elevation has C19 three-light window with stepped cusped lights, also blocked to base, to either side of adjoining central buttress and pointed, chamfered doorcase. East window to south nave aisle similar to clerestory windows, whilst south elevation has two early C14 windows with buttress between, that to east three-light with intersecting tracery and hoodmould, that to west Y-traceried with carved head label stops to sides. Projecting south porch to west has diagonal buttresses either side of moulded, pointed doorcase with additional soffit mould, beyond inner door chamfered with hoodmould and carved labels. Above outer door, a cusped niche with corbel for statue and to either side of porch, small single light windows. Beyond to west the nave aisle has similar west window to that on north aisle and nave wall has similar window again, but probably C15, with segmental tomb niche below. Six clerestory windows above similar to those to north.

Numerous memorials, including good wall memorial to Rogerus Rooe in north nave aisle of 1613 in painted limestone with classical aedicule, topped by coat of arms and below, in semicircular arch, two kneeling figures of man and a woman with altar between inscribed 'Hic iacet Rogerus Rooe de Alport AR. Qui Obiit 30 Aprlis AN Dom 1613', beneath eight small girls praying. To east wall of north aisle is an alabaster plaque of 1492 to Robert and Julia Gilbert with central figure of the Virgin and to sides the kneeling figures of Julia and numerous daughters and Robert with numerous sons, around the edge a Latin inscription. Just to north of this, a small brass memorial to Fridswide Gilbert, probably early C17,with figure of lady dressed in Elizabethan costume. Above, to north, a classical style memorial with swags and cherubs to Carolius Greaves of 1729. To north side of the chancel, is a C14 effigy of a knight with his feet on a lion and to the centre of the chancel, a fine marble tomb in alabaster to Thomas Cockayne, who died 1488 with a diminutive effigy of a knight in armour to the top with his feet on a lion and his head on a chicken, and figures of angels to the sides, holding painted coats of arms. Other memorials include two C19 marble ones to aisless part of nave and one in the tower with coat of arms dated 1685. Also in tower two C18 charity plaques and a lead plaque inscribed 'ED MOORE VIC IONT / CLARK RICH LONG- / DEN IAM ASHBOURNE / CH WARDENS 1701'.

Stone font in nave C12 with round bowl on central stem with four small columns to sides, bowl carved with decorative motifs and to south side it has an extra small bowl supported by salamander corbel. This font was removed from Elton Church in C19. Opposite the font to west of north arcade is a small figure in a semicircular niche, probably a carving of a pilgrimage. Outside in porch, sit two large slate commandment plaques, probably C19.