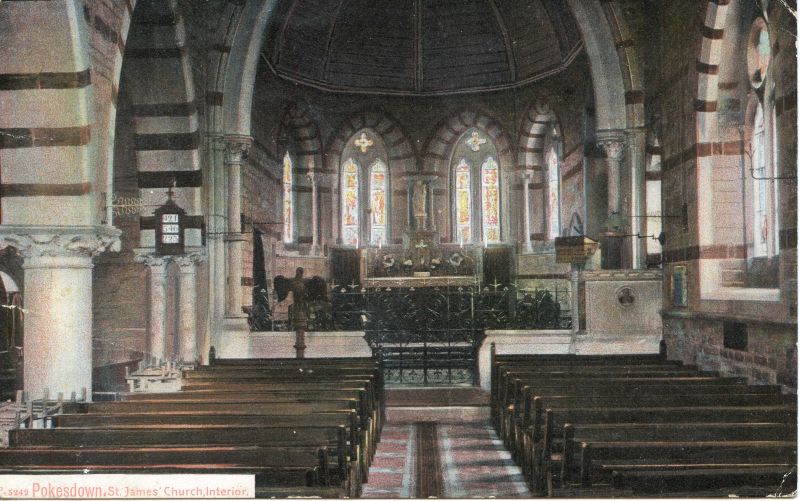 EXTERIOR: The church is approached from the street to the south, revealing the dominant impression of a long low building with an unbroken expanse of roof over the nave. The horizontal lines are emphasised by brown ironstone banding against the pale grey limestone walls. More appears in the voussoirs of the windows. There is a low gabled south porch with sloped buttresses. Everything to its west is from the enlargement of 1928-31. The tracery is Early English, with two nave windows having three lights with foiled circles above. Of these, the one west of the porch is ex-situ, i.e. it was moved here in 1928-31 to make room for the organ loft. At the south-east end of the nave is a double gabled projection, consisting of a churchwardens' vestry to the east (probably of 1870), with matching organ loft to its west, 1928-31. The Lady chapel north of the apse (1928-31) has a three-light east window set in a strangely domestic looking canted bay with a stone roof. To its north is a low vestry of the same date.

INTERIOR: the nave is of five bays, but the arcade to the north aisle of four bays. It has broad arches with ironstone banding as in the exterior. The eastern respond has two slim polished granite shafts against the pier, the first and second piers have circular stone columns with very wide crocketed capitals of French inspiration. The third pier at the west is broad and rectangular; cut from the solid wall to form the western arch when the nave was lengthened in 1928-31. The walls are of rock-faced squared limestone. The apse has four windows closely set, with plate tracery and granite shafts joined at the abaci. The chancel arch has similar shafts in the responds. The chancel roof has close-set semicircular trusses with painted patterns, and over the apse, plainer boarding painted blue with gilded stars. Over the nave, the roofs are five-sided in section and have tie-beams with crown posts. The polished wood floors were recently renewed. Chancel carpeted (the original surface was Minton encaustic tiles). The detail in the north chapel (1928-31) is sparse, but less masculine.

PRINCIPAL FIXTURES: the seating is the original chairs of deal. The plain marble reredos of 1858 has a raised square centre, with a standing figure of the Good Shepherd above. Against the base of the chancel arch (south side) is the pulpit, rectangular in plan and simply detailed, with a pierced trefoil in the front, and a polished granite shaft inset on the angle. The font is square in plan, massive and bulky. It sits on four short granite shafts with crocketed capitals; between them a small arch breaks up into the bowl in the centre of each side. Stone shafts articulate the angles, as in the pulpit. The organ case of 1931 is of light oak, with classical detailing. There is some good stained glass. In the apse, four windows of 1858, possibly by Clayton & Bell who designed that west of the main door (1863). The Walcott memorial east of the entrance is perhaps the best glass here, 1870. The west window has richly coloured glass by Mayer of Munich, 1884. The north aisle windows are all by Lavers, Barraud and Westlake; that at the east of 1873, then two of 1885.

SUBSIDIARY FEATURES: Adjoining the north wall of the north transept is a utilitarian sacristy (1958). The north and west sides of the church are now obscured by the big western annexe (by Rex Brown, 1966), and by a lean-to addition of 1995. On the forecourt to the south-west is a big First World War memorial cross, with schools by Street to the west (of 1857 very plain, much altered and enlarged).

HISTORY: St James was a daughter church to St Peter, Bournemouth, which Street had rebuilt in 1855 for the Rev. Alexander Morden Bennett, a wealthy and convinced Tractarian. In 1858 St James was built to Street's design, the first of at least nineteen Bournemouth churches stemming from St Peter by c. 1900. The design was published in The Ecclesiologist for 1855. A projected tower and spire were never built. It was consecrated on December 23, 1858. The builder was H.C Tucker of Christchurch and the cost was £1750. The Ecclesiologist said in 1866 'We have seldom seen a better cheap church than this'.

George Edmund Street (1824-81) is one of the greatest Victorian architects, and a leading figure of the Gothic Revival. Born and educated in London, he was articled to the Winchester architect Owen Carter from 1841. From 1844 he worked in the office of George Gilbert Scott before commencing practice in Wantage in 1848. Growing success led to a move to London in 1856. His work is characterised by a strong, muscular quality which was much admired from the 1850s. He was also a pioneer of polychromy. His most ambitious work is the Royal Courts of Justice in London, commissioned in 1868. He was diocesan architect for Oxford, York Winchester and Ripon, and was awarded the RIBA Royal Gold Medal in 1874. Like his former master, Scott, Street's fame and status is reflected by his burial at Westminster Abbey.

Charles Marriott Oldrid Scott (1880-1952) was the son of John Oldrid Scott and grandson of Sir George Gilbert Scott. He was articled to Reginald Blomfield in 1898, and returned to his father's practice in 1902. In 1903-4 he worked for G.F Bodley before returning to his father's office as partner in 1904. He appears to have gained few commissions for new buildings, but did much church restoration and enlargement (e.g. completing the spires of St Mary's Cathedral, Edinburgh, work at Selby Abbey etc.)

REASONS FOR DESIGNATION
The Church of St James is designated at Grade II for the following principal reasons:
* A good small church designed by G.E. Street, one the greatest exponents of the Gothic Revival.
* Enlarged in a fairly sympathetic manner by C.M.O. Scott, 1928-31.
* Some modest original fittings by Street include the reredos, pulpit and font.
* Good Victorian stained glass by Clayton & Bell, Lavers, Barraud & Westlake etc.