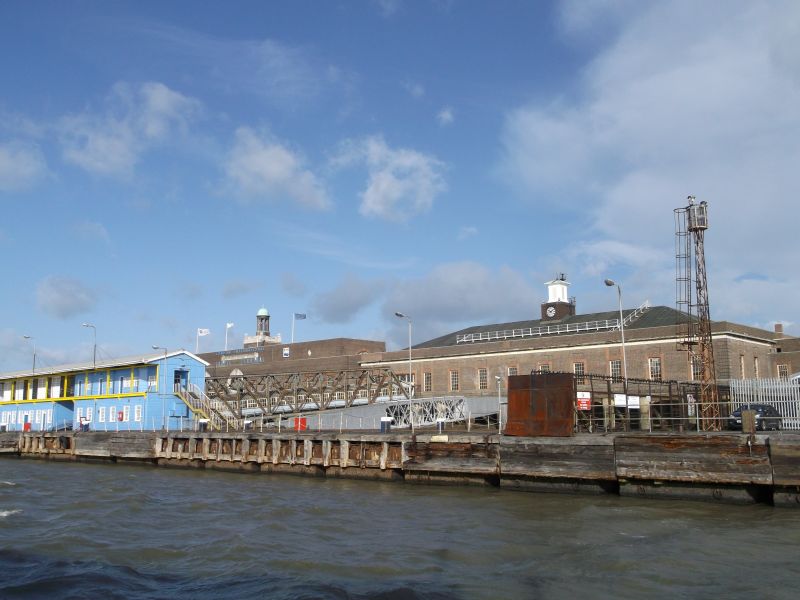 II*
Railway station and baggage hall, ticket office, and floating landing stage. Built in 1924 to designs by Sir Edwin Cooper for the Port of London Authority in a neo-Georgian style.

EXTERIOR
The station has a hipped roof of hand-made red tiles and stone coping. The baggage hall is attached to the western flank of Riverside Station, both being of open plan and with a south elevation fronting the Thames estuary. A smaller block is attached to the west. The buildings are of single-storey elevations, with their fronts facing the Thames and are raised on cylindrical concrete piers with span arches. The small block to the west is two storey. The baggage hall is of 13 bays: the north elevation has keyed flat arches of hand-made red tiles over 35-pane metal casement windows and five sliding plank double doors, and has a continuous verandah supported on wrought-iron fretwork panels with plain railings. The south elevation has stone torus moulding over a rusticated plinth, and revealed panels over similar casement windows with similar multi-keyed tile arches and rusticated red tile quoins. There are two tall openings to the centre, with rusticated semi-circular arched architraves with carved keystones. A recessed second stage, over the centre of the baggage hall, has PORT OF LONDON AUTHORITY inscribed on a Portland stone plaque. Features also include large semi-circular windows with decorative glazing bars and a roof surmounted by a tower with Portland stone balestraded parapet, urn finials and copper-domed cupola supported on Tuscan columns.

The Riverside Station to the east has an 11-bay front facing the river with similar plinth and stone cornice beneath the parapet. Similar windows are set in similar architraves, also with red tile quoining. A wide passenger entry is contained in the second bay from the left, set in a square-headed red tile architrave, with flanking windows having quoining continued as pilasters to the cornice. There are also similar architraves to the right-end bays. The hipped roof is surmounted by a small turret with urn finials, surmounted by a square louvered belfry which has Tuscan corner pilasters and a weathervane to the hipped roof. Attached to the eastern end of the Riverside Station is a wide entrance bay with a hipped roof and decorative fixed metal clerestorey lights. A two-storey block, partly serving as a public house, lies to the rear of this and is designed in similar style with hipped slate roof. The five-bay east elevation has casement windows set in similar square-headed red-tile architraves, with quoining continued as pilasters linking first and ground floors. At first floor is a central arched window flanked by square stone blocks with raised-relief roundels. Four windows to the ground floor have been replaced sometime in the mid-C20. The south elevation has two canted bay windows. The one-storey south elevation has similar architraves to its door and canted bay windows, and decorative overlights (diagonally-crossed glazing bars with margin lights).

INTERIOR
The baggage hall has a segmental-arched vaulted roof with heavy entablature supported on square brick columns with Ionic capitals (Order of Bassae). The bays have paired columns and matching Ionic pilasters to aisles, which have panelled ceilings. There is also a large decorative fanlight over the entrance to the Riverside Station.

The Riverside Station has single-storey offices along three sides, with keyed flat-arched architraves of red brick to 15-pane metal casement windows and half-glazed doors with decorative overlights (diagonally-crossed glazing bars with margin lights. There is a similar decorative pattern and architraves to clerestory lights and a red-brick band beneath the stepped cornice. The north elevation has an entry to the platforms and opposing wide entries to north ends of east and west elevations have friezes of cast-iron bolection-moulded panels. The roof is supported by iron segmental-arched roof trusses.

The ticket office to the centre is finished in similar style to the single-storey offices and has splayed corners. Four steel booms and two walkways, each with boarded walls and glazing-bar lights, connect the floating stage to the baggage hall and the Riverside Station.

HISTORY
The first riverside station at Tilbury was built as part of the London Tilbury and Southend Railway in 1854 with a landing stage facility to enable passengers to join ferries or passenger liners.

After the First World War passenger numbers through Tilbury increased significantly and it was realised that there were no central facilities for passengers. Given that liners were able to berth at this point in the River Thames, it was decided to make Tilbury the centre of passenger operations in London. A Bill was subsequently passed by Parliament to give powers to the Port of London Authority to build a passenger landing stage in 1922, and construction commenced two years later.

The landing stage by The Port of London Authority's architect, Sir Edwin Cooper incorporated a floating platform which projected some 370 feet into the river and was designed to rise and fall with the turn of the tide. Prior to this, passengers were conveyed between ship and shore by a small private vessel. At the western end of the landing stage, a two storey building was constructed to house customs and immigration functions as well as a waiting room and passenger facilities. The landing stage was officially opened in 1930 by the then Prime Minister, J Ramsey MacDonald.

A large baggage hall and new riverside station were also constructed to the designs of Sir Edwin Cooper and for many travellers these handsome neo-Georgian buildings with their red brick facades and grand proportions would have been their first and last sightings of England.

Up until the First World War demand for travel was high with large numbers of passengers travelling to the Far East, India, Australia and New Zealand and partaking in pleasure cruises in the summer months to the mediterranean, Scandinavia and the Canaries. The Second World War interrupted the operation of the terminal but soon after it returned slowly and by the end of the 1940s trade had revived to healthy levels once again.

Perhaps one of the most celebrated occasions in the terminal's history happened in June 1948 when the SS Empire Windrush docked at Tilbury on its voyage from the Caribbean with 500 migrants seeking a new life in the United Kingdom away from the economic depression that had taken hold in their homelands. These men and women were the first significant wave of migrants to come to Britain in the immediate post-war years and represent the beginnings of Britain's black community as we know it today.

By the late 1950s preference for air travel meant that sea travel soon went into rapid decline. By the early 1980s British Rail ended through rail services and in the 1990s the station was formally closed. The landing stage was re-opened in 1995 and was refurbished for leisure uses.

* Built in 1924 in neo-Georgian style, this is a fine example of the work of the noted architect Sir Edwin Cooper in his capacity as architect to the Port of London Authority.

* It is associated with a significant historic event as the landing place in 1948 of the SS Empire Windrush, the first ship to bring a large group of migrants from the Caribbean to the UK, the first generation of what was to become Britain's permanent black community.