A Grade II* Listed Building in Norton and Lenchwick, Worcestershire 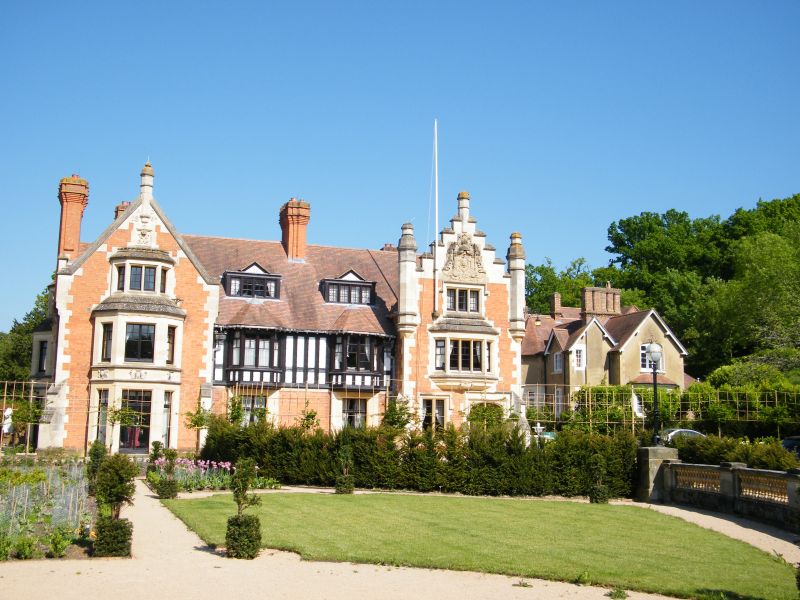 Country house. 1897, by G.H.Hunt, for Duc d'Orleans. Red brick with freestone dressings and
some timber-framing with pargeted panels; plain machine tile roofs with coped parapeted gable
ends. Brick axial, gable-end and lateral stacks with brick shafts and corbelling. PLAN: Large
mansion with principal rooms on the south front and with the entrance side on the east with
the entrance hall in the north east comer leading to an axial corridor behind the principal rooms
and with the services at the back. Jacobethan style. EXTERIOR: 2 and 3 storeys and attic.
Asymmetrical south garden front of 1:2:1:3:1:2 bays, the three single bays are gabled and
advanced and have ashlar 3-storey canted bay windows with cartouches and arms and date in
pinnacled gable above; between the gabled bays the first and attic floors are timber-framed with
pargeted fleur-de-lis in the panels and gabled dormers; between the two right hand gables a
3-bay colonnade with a balustrade above; large lateral stack on the right with stone corbelled
shaft with panel containing Royal cipher and crown. Lead drain pipes and rainwater heads with
Royal cipher and crowns. The asymmetrical east entrance front is of 1:2:1 bays, first floor of
central two bays is timber-framed as on south front, the outer bays are gabled and advanced, the
left as on south front, the right larger with stepped gable and large polygonal turrets and large
carved stone Royal arms in the gable, canted oriel on the first floor and 3-centred arch doorway
on right with crowns, Royal cipher and fleur-de-lis in the spandrels; inside the porch large
carved stone arms and doors with carved panels and fine repousse door-plates. INTERIOR is
sumptuously fitted out; most of the rooms are elaborately panelled and ceiled; there are
intricately detailed door panels, over-doors, door-plates and elaborate chimney pieces; inside
the fireplaces there are cast-iron fire-backs with arms and fleur-de-lis. Above the panelling in
some of the corridors and above the stair dados there are tapestries with fleur-de-lis and Royal
ciphers; the staircases are finely carved, have arcaded balustrades and carved crowns on the
newels. One of the original bathrooms remains intact with a panelled ceiling, marble walls and
bath with shower surmounted by a crown. Some of the original light fittings survive. The roof
has been rebuilt after a fire and the attics were gutted. HISTORY: In 1872 the estate was
bought by the Duc d'Aumale, the fourth son of the King of France. After his death in 1897 it
passed to his great nephew the Duc d'Orleans, who rebuilt Wood Norton Hall. The Duc
d'Aumale was pretender to the French throne and the claim passed to the Duc d'Orleans in
1897. The family left Wood Norton Hall in 1912. It is now occupied by the BBC as a training
centre. SOURCES: Cox, B.G., Wood Norton Hall Near Evesham; 1975. Buildings of
England, pp. 226 and 227.