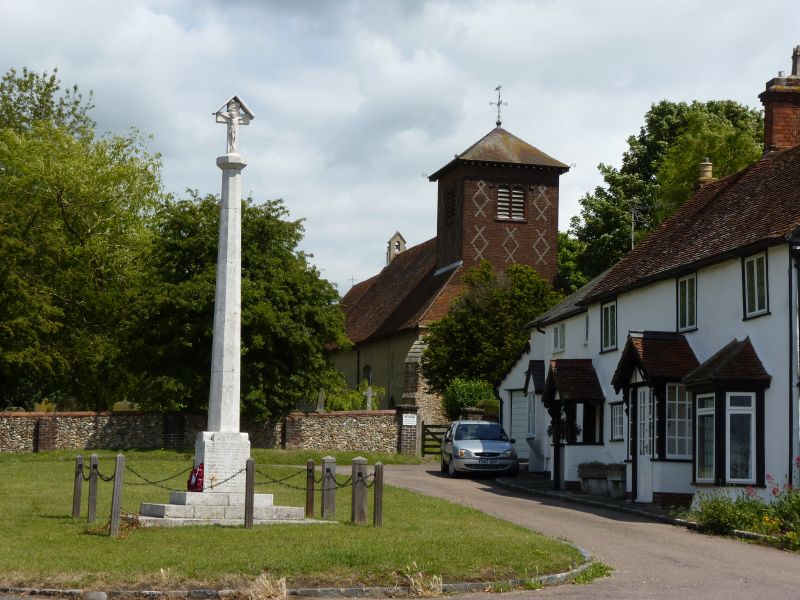 Church of England Parish: Broxted with Chickney and Tilty and Great and Little Easton

2.
Church, probable early C12, C13 and restored in C19. Built of flint and pebble
rubble with lacing courses of roman tile and dressings of limestone and clunch. N and
Gabled peg tile roof. The chancel is C13 with 2 repaired lancet windows in the N and
S walls and a C19 E window of 3 lancet lights. The nave is of supposed C12 origin
with 4 blank round arched recesses in the E part, the remains of a probable crossing
tower. The S doorway is early C12 of 2 orders and with scalloped capitals. The N
doorway, now blocked, is C13 with double chamfered jambs, 2 centred arches and a
moulded label. The N wall has a C19 window and a brick C16 window of 2 four-centred
lights under square head with sunk spandrels. The S wall has 3 windows - a C14
window of 2 cinque foiled lights with a quatre foil in a two-centred head, a C16
2 light window and a blocked C12 light high in the wall. The 7-cant roofs over nave
and chancel are C19. At the W end is a red brick early C19 bell tower mounted on the
original W wall and with a contemporary brick supporting wall to the E. This has grey
brick drapering and a pyramidical peg tile roof. On N, S and W faces are 2 light bell
chamber openings with label moulding heads. The S porch is C19 but has C15 cambered
and moulded tie beam with moulded braces. Graded for architectural, historic, topo-
graphical and townscape value. (RCHM 1).