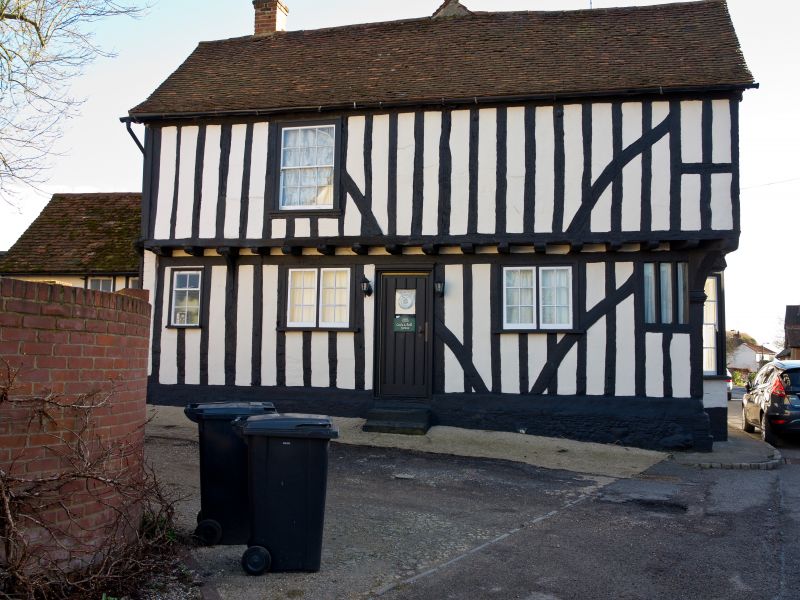 Public house. C.1400 and C16. Timber framed and plastered but with frame
exposed on front and north flank. Roofs are gabled and of peg tile. Of 2
storeys and of 'H' plan form with crosswings at north and south ends. North
crosswing is jettied on north and west faces with a dragon post with moulded
capital, original jetty brackets and double bracing on the front. A 3 light
window on the corner has glazed hollow chamfered mullions. The 'hall' block is
contemporary with this and was formerly jettied along its front. This part is
now concealed by a parapetted single storey infill block of white plastered
brick. The south C16 crosswing has exposed framing showing cills of former pair
of oriel windows and 2 original jetty brackets. On the upper floor flank an
arch headed window opening is now blocked with plaster. A large stack projects
through the flat roofed extension against the flank of this wing. Windows are a
mixture of C18 double hung sash windows with small panes and C20 casements.
Under the north jetty is a canted C18 bay window of double hung sashes.
Internally, the north crosswing is of 2 bays with chamfered girts with a
cambered central tie beam on knee brackets and a crown post roof with
longitudinal braces. In the upper floor a narrow arch headed door leads to the
first floor chamber or the hall. This appears to be contemporary and similar to
the crosswing whichhas soffit tennoned floor joists and a possibly original rear
lean-to. This curious structure is of one very large bay with traces of old
floor opening for former smoke hood. The south crosswing of the C16 has a
moulded and arch headed parlour door and moulded bridging joists on moulded
impost blocks. This wing is of 3 bays and the rear chamber has another blocked
arch headed window to the rear yard. To the rear of the main building is a
range of attached 2 and single storey outbuildings some with pantile and some
with peg tile roofs. A single storey C20 block with gable peg tile roof is
attached to the rear of the north wing. RCHM 13.