A Grade I Listed Building in High Easter, Essex 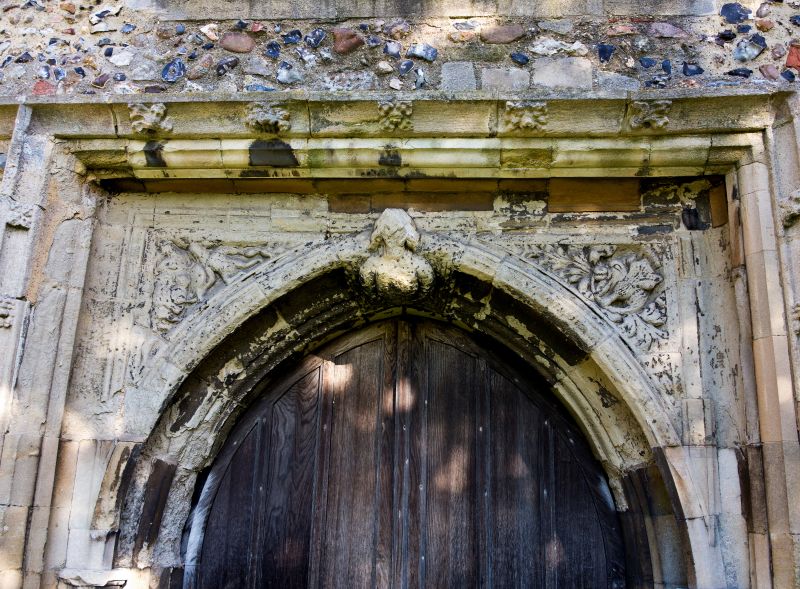 Parish church. C12, C13, C14, C15, C16 and C19. Walls of flint rubble with
some Roman brick and tiles in coursed herringbone work and as quoins. Dressings
are mostly of Reigate stone and clunch. Clerestorey and south porch of red
brick and roofs of lead behind battlemented parapets. Consists of nave, north
aisle, chancel, south porch, tower and C19 vestry. The nave has a north arcade
of c.1400 and of 4 bays inserted in the C12 wall. The columns are octagonal
with moulded capitals and bases and the arches are 2 centred and of 2 hollow
chamfered orders. The south wall has 3 c.1400 windows, largely rebuilt, and
traces of a C12 window with semi-circular arch. The south doorway is C12 with
plain jambs, semi-circular arch and grooved and hollow chamfered imposts. The
door is C15 with plain battens and 3 strap-hinges and sexfoil scutchion. the
early C16 clerestorey has 2 windows in the east wall and 4 in the north and
south walls. They are of 3 trefoiled lights under 4 centred heads with
moulded label. Some diapering on north exterior wall and pilaster buttresses
with crow stepped tabling on south wall. The roof is of early C16 date and
consists of 4 bays of low pitched queen post trusses with moulded and embattled
tie beams carved with running foliage. The spandrels are traceried and 4
centred braces form 4 centred arches with carved bosses. There are similar
bosses at the junctions of principal rafters and purlins. In each bay, over the
clerestorey windows is a 4 centred arch with traceried spandrels. The north
aisle has an embattled parapet and 3 windows in the north wall all much
restored. The central window is of 2 cinquefoiled ogee lights under a 2 centred
head, probably of the C14. The westernmost window is of 2 trefoiled lights
under a 2-centred head probably of the early C14. Between the 2 westernmost
windows is the C14 north doorway, which has moulded jambs, 2 centred arch and
label and is built partly of reused C12 masonry. In the W wall is a restored
window, of part C14 date but of C12 masonry. The roof is of C15 lean-to type,
of 4 bays with curved chamfered braces to the wall posts. The chancel has
quoins of Roman brick. In the E wall is a window with C15 remnants. In the
north wall is a C15 doorway with moulded jambs and 2 centred arch under a square
head having quartrefoil spandrels and a moulded internal label. In the S wall
are 2 C15 windows, each of 2 restored lights under a 4 centred head with a rear
arch of 2 chamfered orders. Between the windows are traces of a former window
of the C13 and C14. Further E is a doorway with chamfered jambs and 2 centred
arch, probably of the early C14. The chancel arch, possibly of the C14, is 2
centred and of 2 chamfered orders. The C12 respond survives and is of 2 square
orders towards the nave and one to the chancel. The north respond is of reused
C12 masonry. C14 piscina with octagonal drain in recess with cinquefoiled 2
centred head and moulded jambs and adjoining simple recessed sedilia under south
east window. The W tower is of the C15 and of 3 stages. The moulded plinth has
chequer work and below the embattled parapet is a string course with bosses
carved with heads of beasts etc., and much weathered gargoyles. The moulded and
2-centred tower arch has moulded responds each with an attached shaft with
moulded base and capital. The moulded label has angel stops. S of this is the
stair turret door with moulded jambs and 4 centred arch. The door is C15. The
west doorway has a moulded 2-centred arch in a square head with spandrels carved
with a horseman and woodman on north side and a winged beast on the south with a
bust of an angel with shield at the apex. The moulded jambs and each base have
an attached shaft with moulded capital and base. The moulded label is mitred
into a string course and has carved bosses and stops. The W window is restored
but has external label-stops carved with figures playing musical instruments.
The north west and south walls of the second stage have each a small
cinquefoiled window with a square label. The bell chamber has in each wall a
window of 2 transomed and cinquefoiled lights under a 2-centred head with a
label having head stops. On the east wall of the tower are traces of the old
high pitched roof of the nave. The early C16 south brick porch has a double
chamfered plinth, a stepped gable and an embattled parapet. The outer archway
has moulded jambs and 4-centred arch under a square head and moulded label. In
the east wall is a window of 3 trefoiled lights in a square head with moulded
label. In the west wall is a plain rectangular window. The C14 font has an
octagonal bowl, the faces carved alternately with angels holding shields and
with symbols of the Evangelists. Stem octagonal with shaped stops and lead
lining with scratched inscription and date 1594. Fragments of C14 or C15
stained glass in south window of nave. Graded for architectural, historic and
landscape value. RCHM 1.