A Grade I Listed Building in Felsted, Essex 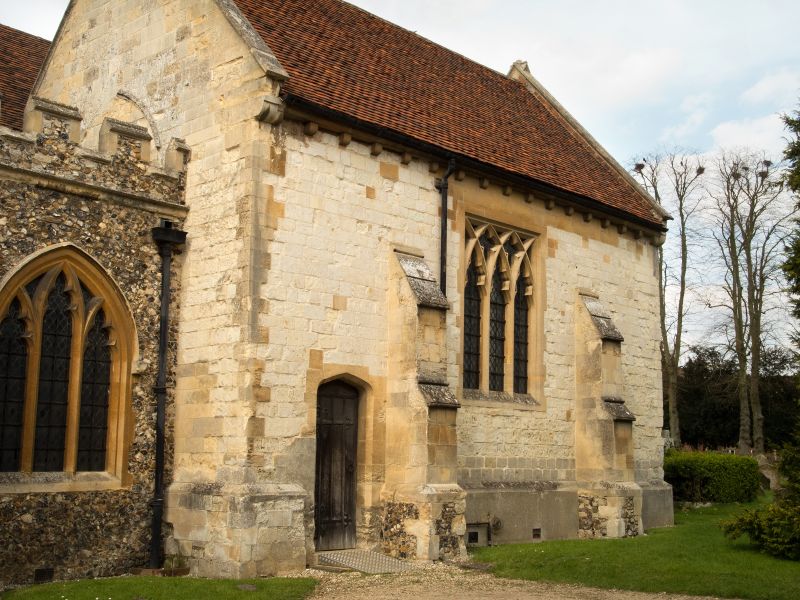 Church. E.C12 with C14, C16 and later additions and alterations. Mainly built
of rubble and flint, with some brick and tile, and stone dressings. The South
Chapel of clunch ashlar. Plain red tile and lead roofs. Early C12 West Tower
and N.W. angle of Nave. Late C12 South aisle and arcade. Early C14 North aisle
and arcade and clerestorey. Chancel and possibly South aisle rebuilt Mid C14.
C15 North vestry with 2 contemporary windows of 1 and 2 lights. C15 South Porch
with modern outer arch and 1 light windows. Early C16 South Chapel. Late C19
Organ Chamber built between South aisle and South Chapel. Much restoration work
was carried out C19 and C20. Roofs to Chancel and Nave of 7 cants with moulded
wall plates and 3 and 5 tie beams respectively. Both aisle roofs are almost
flat with stone corbels to wall plates of N. aisle, and brackets to tie beams.
Repairs to both were carried out between c.1770 and c.1800. The West Tower is
of 3 stages and crenellated, with a stair turret in S.W. angle lit by round-
headed loops in S. & W. walls. The semi-circular Tower Arch is of 2 orders, the
outer roll moulded and the inner of brick of unknown date, with modern detached
shafts to responds, and a modern wooden screen separates Choir Vestry from the
Nave. The West Norman doorway is of 3 semi-circular orders, the outer two
chevron, the inner plain with plain lintel and tympanium. The jambs each had 2
shafts, but are much restored. Above the door is a 2 order round-headed window.
The original doorway to the turret has round-headed arch. Second stage, East
wall has round-headed doorway opening into the nave. N. S. & W. walls with
round-headed windows. Bell Chamber with modern round-headed windows. The C18
bell cote is an octagonal pyramid with open octagonal cupola with moulded base
and cornice and ogee coping surmounted by a vane. The cupola contains the C18
south wall clock bell. The nave has 2 arcades of 4 bays E.C.12. South arcade
with 2 circular piers and centre octagonal pier, with foliated capitals and
chamfered plinths. North arcade with 3 octagonal piers with moulded capitals
and bases. The arches are 2 centred of 2 chamfered orders. All arches are
plastered with a scalloped soffit decoration which is repeated in the tower
arch. North aisle, is uncrenellated and has 3 grotesques above the windows.
There are 2, 2 stage buttresses and 4 modern, 3 light, 2 light alternating
windows in flat heads,
the west Wall has a C14 one light window with 2 centred head and moulded labels.
The South aisle wall is crenellated, with 2 stage buttresses and 3 modern, 3 light
windows. The reset South door, has a 2 centre arch of 3 square arches with moulded
label. The jambs, each with 2 side shafts, with carved water leaf capitals and
square moulded abaci. The West wall has C14 window with central mullion and cusped
tracery. The C15 Porch is crenellated, with modern doors and windows. On the E.
side of the door is a holy water stoup. The Clerestorey has on each side, 3 windows
of 2 lights, modern, except for the splays and rear arches with moulded labels.
Chancel Arch C14, 2 centred of 2 moulded arches, modern responds. North Vestry
with 2 C15 windows of one and 2 lights under a square head. 2 modern doorways.
South Chapel is much restored with C19/C20 door and 2 windows. 3 light design,
one with arched head and one with flat head, and in the W wall a modern arch to
the organ chamber, which was built 1877. Chancel C19. E. window set in C14 opening
with original splays, 2 centred rear arch and moulded internal label. The opening
reduced in height for the C19 window. 2 C14 windows, one in the N. wall, each of
2 trefoiled lights. East of these is the C19 doorway to the Vestry. The S. wall
has a C19 arcade of 2 bays opening into the S. Chapel.
Fittings. In S. Chapel Monument to Richard 1st Lord Rich 1566 and Robert, his son
1581. Alabaster and marble, consisting of altar-tomb and effigy, canopy and kneeling
figure at W. end. Altar tomb on high step and divided at N. end by pilasters of
black and green marble. In the bays is a panel incised with a figure subject (a)
Ld. Rich on horseback with mace bearer and attendants (b) Ld Rich's funeral hearse
with effigy under elaborate canopy. Effigy of Ld. Rich reclines on alter tomb
in flat cap and furred robe, book in right hand, bearded face. Flat classical canopy
supported by 2 black marble Corinthian columns with strap work pedestal, capitals
and bases, all of alabaster. Above the cornice a pediment flanked by vases. Wall
at back of 3 bays with panels carved in relief. At west end of altar-tomb a small
reading desk at which kneels an alabster effigy in half plate armour, with broken
left arm, and at the back a panel of arms in a segmental head.
Font. A square Norman bowl with a head carved on the boss at each angle. Supports
are C20. Alleged to have been found in the River Chelmer.
Brasses. Effigy of Chistina Bray 1420 AD and an effigy of a man in plate armour
1414 AD. E.C14 Black marble slab, the matrix of a brass in which there is a long
foliated cross and a small effigy of a priest. In the N. wall of the Sanctuary
are the remains of the C14 altar tomb, recess with two-centred ogee moulded arch
with cinquefoiled soffit sub cusped in the middle cusp on each side. Moulded and
crocketed label with elaborate finial side, shafts with moulded and carved capitals
and bases, flanked by projecting buttresses with gabled and crocketed pinnacles
with carved finials. Piscina in vestry S. wall C15 with moulded jambs and cinquefoil
arch in square head, shelf and circular drain. Poor Box, nail studded and iron
bound with 3 locks, possibly L.C16, on second pier of S. Arcade of Nave. RCHM 1.