Old School Room and Lych Gate and Building to West

A Grade I Listed Building in Felsted, Dunmow, Essex 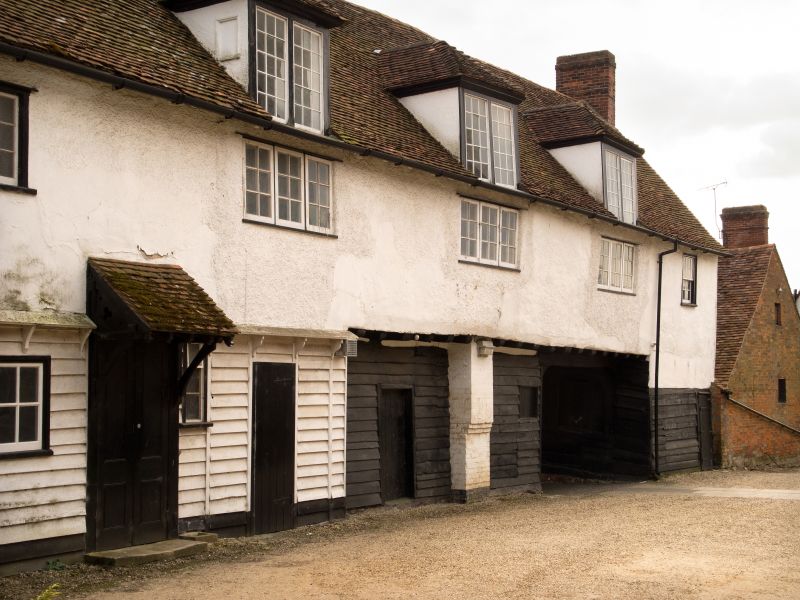 School Room founded by Richard Lord Riche 1564 but probably previously a Guild
Hall of C14/C15. 2 Storeys and attics with 4 hipped dormer windows to front
the far right now blocked-in, the others with C17 small paned leaded windows
and 3 similar dormers to rear. Red plain tiled roof. Timber framed and
plastered with long wall jetty to front and rear with bracket support. Two, 3
light, small paned casements to right and left on first floor front and 5 ranges
of small paned casements and 1 sliding sash windows to rear. Ground floor left
to right, C20 Post Office window, Lych Gate, 4 range C18 sliding sash windows
with central 6 panel door, approached by steps with 4 light window above.
Immediately over the door is a plaque relating the founding of the school.
Ground floor rear is mainly weatherboard with 3 plain board doors and to the
left, a 4 panel door with 2 lights, with a slanting, red tiled porch supported
by wooden brackets. One small paned sliding sash window and 2 small C20
windows. The weatherboard right and left of this door is outbuilt from the
jetty with ornamental false brackets and louvres. There is a brick pillar to
the right. The Lych Gate to the Churchyard runs under the building to the left
and still retains original lintels curved brackets and exposed ceiling beams.
Original doorway and window opening in east wall and window openings with
original shutters in west wall. Red brick chimney stacks to left and right.
Internally:- There is a cross quadrate crown post roof with arched braces, and
stop chamfered tie beams. Tread and riser staircase from rear with much
graffiti on the boarded walls. Much heavy timber exposed throughout. Document
of 1378 refers to shops on this site. Now used as Art Rooms by Felsted School.
RCHM 13