Church of Christ the King and Attached Railings and Walls

A Grade I Listed Building in Wembley, London 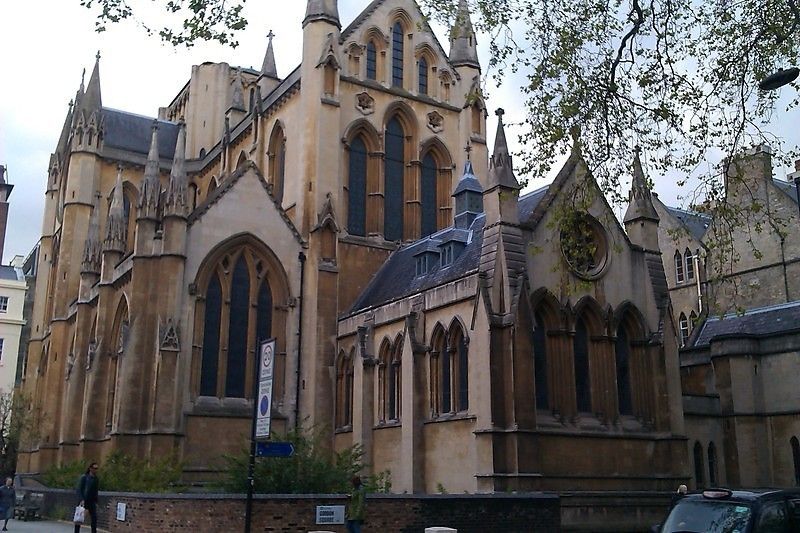 Entry Name: Church of Christ the King and Attached Railings and Walls

Formerly known as: Catholic Apostolic Church GORDON SQUARE.
Church, now the Church of England Chaplaincy to the University
of London. c1851-4. By JR Brandon. Bath stone ashlar with
tiled roofs.
PLAN/STYLE: cruciform plan, with central tower, in Early
English style on a cathedral scale. 5-bay aisled nave with
full triforium and clerestory, 3-bay sanctuary with side
aisles and 3-bay Lady Chapel.
EXTERIOR: gabled entrance porch, at east end, with angle
buttresses, moulded, pointed arch entrance above which a
2-light and oculus plate tracery window; linked to the Lady
Chapel with octagonal turret and 2-light room. Entrance on the
north side of the church approached by a cloister walk from
the porch. East facade of Lady Chapel with arcaded lancet
windows, above which a small rose window and gable. Gabled and
pinnacled buttresses. Gabled east facade of nave with 3 large
lancets, above which 5 smaller lancets. Octagonal corner
turrets with gabled niches and terminating in spires with
gablets. South facade with paired lancets to Lady Chapel
separated by gabled buttresses; parapet, 2 roof dormers and
lantern. 2-light, plate tracery aisle windows with
quatrefoils. Paired pointed clerestory windows, those in the
sanctuary being single. Pinnacled buttresses and corbelled
parapets. Gabled transept with octagonal turrets at angles
terminating with gablets and spires. Tripartite lancets at
ground and 1st storey level with rose window above. Tower base
with mostly blind arcading. West end unfinished in brick apart
from entrance in stone. 3 lancets.
INTERIOR: nave has timber hammer beam roof with angels and
central bosses of snowflake design; double-arcaded triforium.
Roll moulded crossing arches on clustered columns. C19 south
transept rose window, by Archibald Nicholson, with dove in
centre surrounded by musician angels and cherubim and
seraphim. In the lancets below Christ in Majesty with ranks of
saints, apostles and angels and earth below. Sanctuary roof
rib-vaulted in stone with foliated bosses. Brass sanctuary
lamp by Pugin. Screen behind high alter with open traceried
window to Lady Chapel. The Lady Chapel, formerly the English
Chapel, with richly painted timber roof and stone angel

corbels. Deeply cut stone sedilia around the chapel. C20
glass.
SUBSIDIARY FEATURES: attached cast-iron railings with foliated
finials and brick and stone walls to areas.
HISTORICAL NOTE: built as the headquarters of the Catholic
Apostolic Church of the Irvingites, but only 5 of the 7
projected nave bays were completed; the west wall was a
temporary one. The uncompleted crossing tower was designed to
have a spire 300 feet high. When the last Catholic Apostolic
priest died in 1963 the church became part of the Anglican
University Chaplaincy, becoming the sole place of worship in
1968.
(Survey of London: Vol. XXI, Tottenham Court Road and
Neighbourhood, St Pancras III: London: -1949: 92).