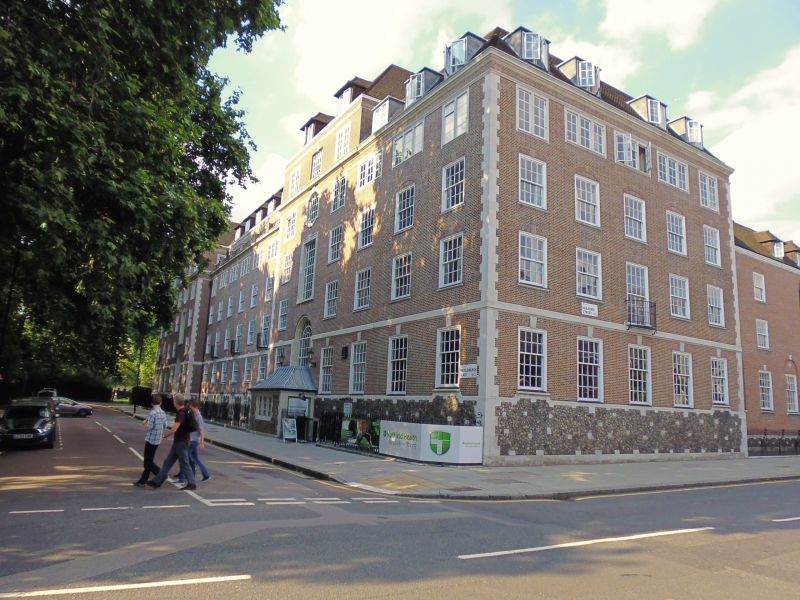 International Hall of Residence for post-graduates. 1936-63. By Sir Herbert Baker (who prepared a complete scheme in the 1930s), Alexander T Scott and Vernon Helbing.

Doughty Street (east) front largely of 1961-3, similar to south front but simplified, with three open round entrance arches in centre, the middle one raised.

Mecklenburgh Place (west) front of 1949-54 plain, basically symmetrical with some irregularities and occasional iron balconies. Open quadrangle within has good elevations, notably the east side where the five-bay stone-dressed hall is set left of centre with full-height central bay bearing inscription to Evan Evans Bevan below round-headed window; and south side which has projecting round-arched cloister arcade along ground storey and a bust of F.C Goodenough in niche over central entrance.

INTERIOR: wing of 1936-7 has generous asymmetrical staircase hall, paved and walled to half-height in Hopton Wood stone, balustrade partly stone, partly iron, urns in niches. Double-height dining hall with high oak panelling, plaster over with astronomical 'Empire clock' at south end, and cove to ceiling with coloured plaster shields and devices by Laurence Turner. Ground floor with common room with deep plastered beams. Parsons Library over (partly altered) with oak bookcases to half height and cove to ceiling with plaster shields and devices commemorating scientific institutions also by Turner. South-west wing includes on ground floor Churchill Room of 1952, oak-panelled to full height, and a small chapel formed in 1962-3 by Helbing with panelling behind altar.

HISTORICAL NOTE: London House was established in 1931 by F.C Goodenough, who raised the funds with which to found the Dominion Students' Hall Trust, as a place where students from the British Empire could live a collegiate life. One of Sir Herbert Baker's most characteristic later buildings, comparable with Rhodes House, Oxford, and Church House, Westminster. The post-war northern and western ranges were completed to a simplified design after Baker's death in 1944.