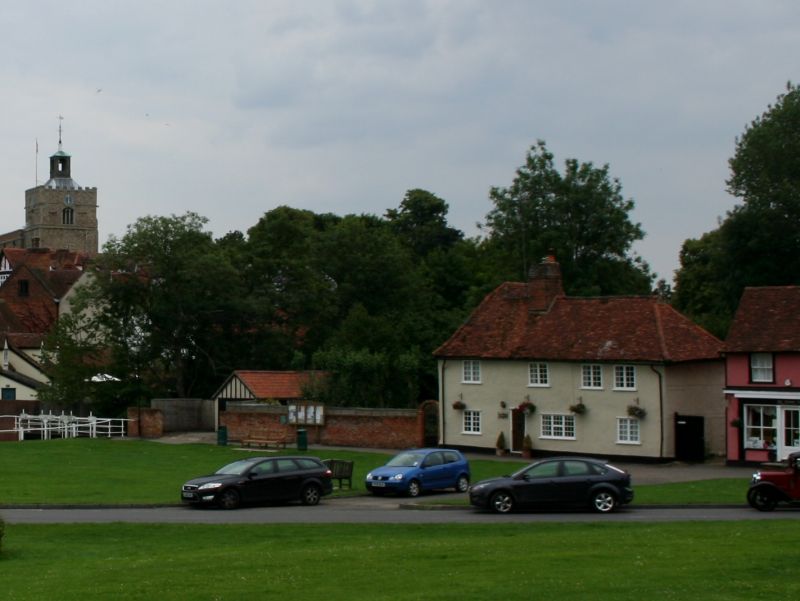 GV
II
House. Of builds, early C15 or earlier and mid C16, altered in C19 and C20. Timber framed, plastered, roofed with handmade red clay tiles. Facing northwest. Two-bay crosswing at left, early C15 or earlier, of a hall house of which the remainder has been demolished, with C19 external stack at rear. Two-bay range at right, mid C16, with axial stack of c.1600 at the junction, forming a lobby-entrance. C19 single-storey extension with slate roof to rear of right end.

Single-storey lean-to extension to rear of middle part, incorporating a gabled two-storey part which may represent the earlier stair tower, but now mainly C20. Two storeys. Four-window range of C20 casements, C20 door. Both parts were originally jettied to the front, now underbuilt. Roof hipped and gabled at right end. The crosswing has large plain joists of horizontal section jointed to the binding beam with unrefined central tenons, exposed in the front bay, plastered to the soffits in the rear bay, jowled posts, cambered tiebeam with arched braces, and crownpost roof. The central tiebeam is square with four-way arched braces. The roof was originally gabled to the front, now altered to a hip but otherwise complete. The main range has a chamfered binding beam with step stops, chamfered bridging beams, and plain joists of horizontal section jointed with soffit tenons with diminished haunches. The upper storey has jowled posts, close studding, diamond mortices for an unglazed window at the right end, and a crownpost roof with thin axial braces. The stack has a chamfered mantel beam with lamb's tongue stops. The 1960 Schedule states that this house was recorded by the RCHM as no. 20, but the map on p. 94 of the RCHM Inventory shows that this is incorrect.