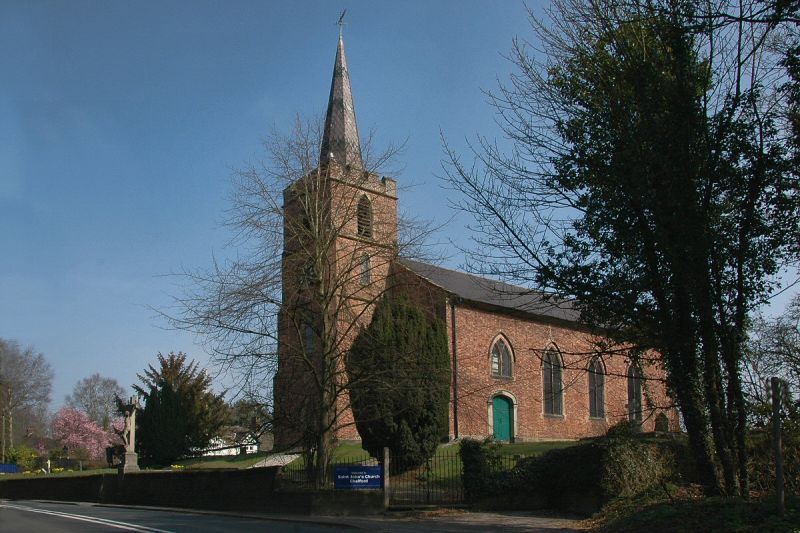 Church. 1776 with later additions. Red Flemish and English garden
wall bond brick with stone dressings and a slate roof. West tower,
nave with gallery and chancel. South front: stone base tower to left
of 3 stages diagonally buttressed. One ground floor lancet with stone
surround and hood mould. Stone surrounded lancet to second stage.
Stone surround to belfry lancet with louvres. Battlemented parapet.
Octagonal spire covered with diamond-shaped slates and crowned by
weather-vane. There are stone bands between each stage and below the
parapet and stone off-sets to the buttresses which die into the tower
at the level of the band above the second stage. West front: pointed
arched doorway with hood mould. Blank shield above. Lancet above
this. Circular clock face set in square stone surround with belfry
opening above. Nave of 4 bays. Four-centred double doorway to left
with stone surround above 3 stone steps. Y-tracery window above with
hood mould and cusping to central upper light. Similar windows to
right extending lower. Original chancel of one bay extended c.1902 to
make it of 2 bays. Triple lancet window beneath four-centred stone
relieving arch to left. One lancet to right with hood mould. The
buttresses between the windows and at the south-east angle have swept
weathering. North front similar save for recent C20 addition to right
of chancel. East end: window contemporary with 1776 building, reset.
Intersecting tracery and cusping forming 2 mouchettes and a quatrefoil
at the top.
Interior: C18 box pews with raised and fielded panels. Two side
aisles but none to centre. Western gallery (now converted to meeting
room). Ceiling has decorative central motif and triglyphs to cornice.
Chancel has glass of c.1860 to east window and painted mural
decoration of sprays of flowers and figures of saints to all chancel
walls and to east wall of nave in an Art Nouveau style. Similarly Art
Nouveau pulpit, altar rails and choir stalls designed by Percy
Worthington in 1903.