A Grade I Listed Building in Croft-on-Tees, North Yorkshire 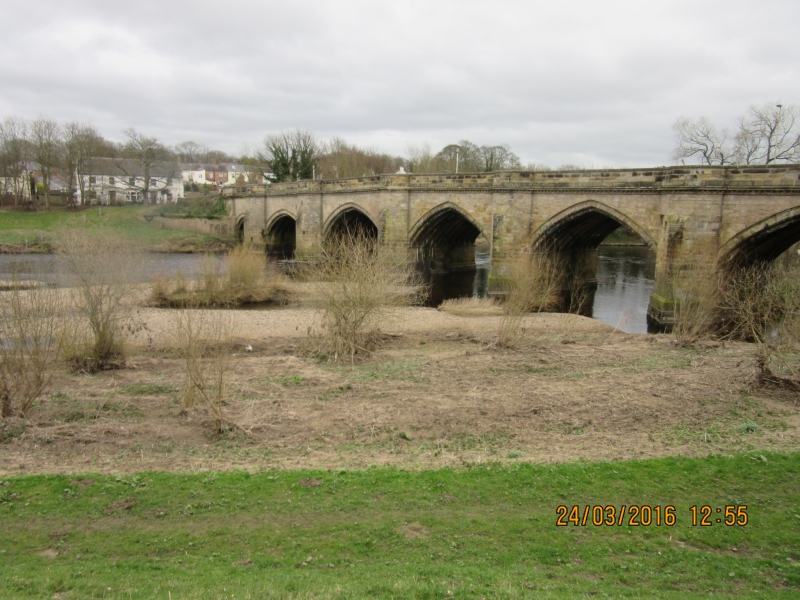 I
Multi-span road bridge over the River Tees. Probably C14 in date, restored in 1673 (plaque on downstream parapet). Restored again in 1781 by Thomas Bott (inscription on south-east cutwater) and widened by about 5m metres on upstream side in 1795 by architect and engineer John Carr. The original medieval masonry on the downstream face is of squared red sandstone while the restorations and the extended upstream face are of grey dressed and ashlar sandstone.
Overall, the multi-span bridge is about 160m long with splayed end walls.
DOWNSTREAM FACE: 6 double-chamfered pointed arches, on 5 chamfered ribs, under hoodmoulds with a smaller round arch at the east (Durham) end and triangular-plan cutwaters. A parapet projects on small shield-shaped brackets, and forms semi-octagonal refuges above each cutwater. Parapet slightly raked down towards east end. There are splayed end walls with cylindrical end piers with ogee-domed caps.
UPSTREAM FACE: similar to downstream face except that the small east end arch is slightly pointed and each arch has 6 chamfered ribs; the cutwaters have double-chamfered plinths and the parapet projects on modillions. There is a dated 1673 plaque with an illegible inscription on the inner face of the parapet above third arch from west end. A pink granite plaque on the north-west refuge commemorates Queen Victoria's 1897 Diamond Jubilee. This bridge straddles the parishes of Hurworth and Croft.
SOURCES: E. Jervoise, The Ancient Bridges of the North of England, 1931; The works in architecture of John Carr, 1973, p8.
HISTORY: In 1356, the bridge at Croft was described as being `in a dangerous state by the great flooding of the river' and a Grant of Pontage was made to pay for its repair. The bridge is believed to have been rebuilt in the C15, and between 1562 and 1580, 184 pounds was spent on repairs. In 1616, it was described as being in a `ruinous and decayed condition' and in 1631 as a `great ruin'. During the period of the Commonwealth in the 1650s the bridge saw further repair work recorded by the North Riding Quarter Sessions with 60 pounds spent in 1651, 150 pounds in 1657 and 66 pounds 13 shillings 4 pence in 1658. A now illegible plaque on the downstream parapet above the third pier from the east end recorded the restoration of the bridge in 1673. Opposite on the upstream parapet there are the coats of arms of Yorkshire and County Durham marking the boundary between the two counties, which was first defined in the same year. The bridge withstood the great flood of February 1753 although the turnpike house together with 50 pounds in tolls were swept away, but it was restored again in 1781 by Thomas Bott. In 1795 John Carr, the North Riding's County Surveyor, widened the bridge upstream by about 5m in a style similar to that of the medieval bridge. John Carr is a national figure and the leading York and Yorkshire architect of his time, whose best work is considered to reach the very best at national level. He has a number of listed buildings to his name, many of them listed in the higher grades. In 1822, the carriageway was dug up and relaid to follow `Mr McAdam's principal' of road building. Tolls formerly ceased on the bridge in 1879.

Today the bridge forms part of a great ceremonial tradition whereby at its centre, a sword known as the Conyers Falchion and normally housed in the treasury of Durham Cathedral is presented to each new Bishop of Durham on entering the diocese for the first time.

A bridge of C14 date, which carries a well-established route way over the River Tees, to and from the Palatinate of Durham. It was subsequently repaired and restored, then widened in the later C18 by the architect John Carr. It is of exceptional interest as a monumental medieval multi-span bridge, which displays high quality architectural merit illustrated in its constructional and decorative detailing and technical skill apparent in its large-scale construction. The alterations by the renowned national architect and engineer John Carr enhance the significance of this bridge, all of which taken together mean that it fully merits inclusion in the statutory list in Grade I.