A Grade I Listed Building in Brampton, Derbyshire 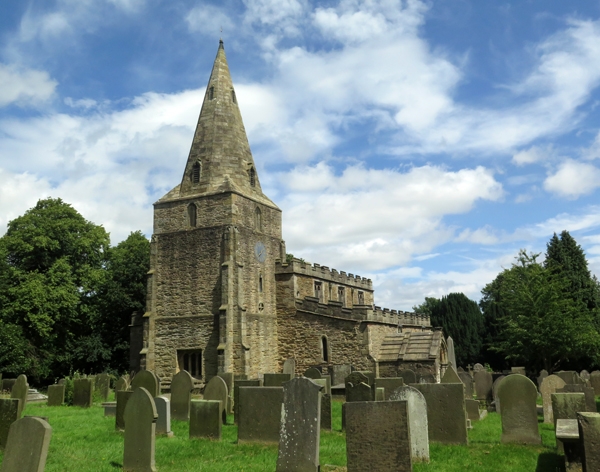 The tower is of three stages with weathered set-backs and with angle buttresses. The bell openings are each of two pointed lights under a pointed head. The tower has two tiers of lucarnes. The west window is of three Tudor-arched lights in a moulded rectangular opening. On the south side the middle stage of the tower has a one-light chamfered window below a clock face. Below that there is a window formed by a cross within a circle.

The north aisle has mullioned windows with rounded heads to the lights - of two lights facing west and of three and two lights facing north. Towards the right-hand end of the north wall is a blocked chamfered round-arched doorway. The clerestory has three windows each of two cinquefoiled lights. The south clerestory is similar. The west window of the south aisle is a narrow chamfered lancet. To the right of the porch there are two moulded mullioned windows, each of three cinquefoiled lights. Above the left-hand window is a re-set worn carved figure, and to the left of the right-hand window a carved 'Green Man' figure.

The porch has a double-chamfered arch with moulded capitals to the responds and with the outer order of the arch and the crocketed hood mould having an ogee shape. The roof is of solid stone slabs, partly supported by a chamfered pointed internal arch. The inner doorway is Norman and probably re-set with a slight point to the round arch. The inner order is chamfered and the outer one square and carried on angle shafts. Set above the doorway is a stone tablet carved with a figure. The east window of the south aisle is of three mullioned lights under a flat head. Above is a tablet (the upper part damaged) carved with a seated figure of Christ. To the left is a figure of the Virgin and Child. The south wall of the chancel has two three-light mullioned windows with flat heads. Between them is a chamfered doorway with triangular head, and above is the carved head of a 'Green Man'. The east window of the chancel is pointed and has C19 cusped tracery. The north wall of the chancel is blank. In the angle with the north aisle is a vestry and boiler house.

INTERIOR: the internal walls are of exposed rubble with ashlar dressings. The tower arch is pointed, with two square outer orders and one inner chamfered order. The responds are keel-moulded and have moulded capitals. Two tower buttresses project into the nave. The nave arcades are of three bays and have pointed arches chamfered in two orders springing from alternate round and quatrefoil piers. Chamfered relieving arches over the two eastern bays were inserted in 1821 when the eastern piers were removed. These were reinstated during the 1868 restoration. Above the chancel arch is a chamfered basket arch. The chancel arch below is pointed and is chamfered in three orders springing from shafts with moulded capitals. The nave roof is boarded and has pine king-post trusses. The north wall of the north aisle contains a trefoiled piscina with a broken bowl. An organ is set within a C19 pointed archway in the north wall of the chancel. The chancel roof is boarded and has three collar-beam trusses. To each side of the tower arch are re-set canopied figures of St Peter and St Paul, formerly in the south wall of the south aisle.

Attached to the wall to the left of the arch is a grave slab to Matilda le Caus (d. 1224) with a Lombardic inscription and with a carved head, shoulders, and hands holding a heart visible through a quatrefoil. A memorial attached to the north wall of the north aisle was erected in 1673 in memory of the Clarke family and has crudely carved figure holding curtains away from the inscription. A memorial to Geoffrey Clarke (d. 1734) at the east end of the north aisle is of marble and carved with sarcophagus, urn, Corinthian pilasters, and a broken segmental pediment. It is inscribed: 'Sam Huskisson Fecit'.

The octagonal sandstone font appears to be late C19 and has tracery decoration. Late C19 glass includes an east window showing the Ascension of Christ, and two windows in the south wall of the chancel showing scenes from the life of Christ.