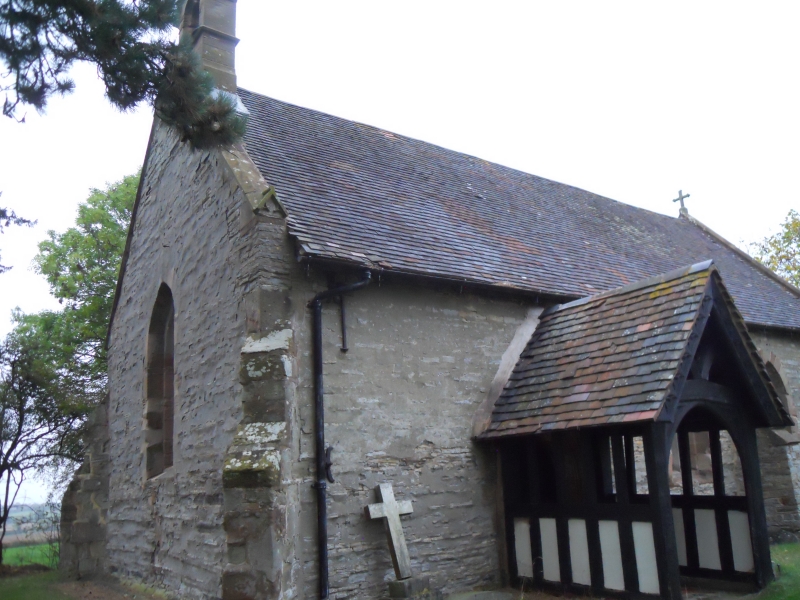 PLAN: Nave and chancel under a single roof, with south porch and west bellcote.

EXTERIOR: In a simple Gothic style, the church is buttressed, including diagonal buttresses and earlier south-east angle buttresses. The south doorway has a continuous moulding and the blocked north doorway is similar. The timber-framed porch has an arched entrance with cusping in the spandrels, and blind cusped arches to the barge boards. Windows are 2-light with Y-tracery, two in the south and north walls, one in the west wall and a similar east window of 3 lights with intersecting tracery. The gabled west bellcote has a single ogee cusped opening for a bell.

INTERIOR: The 3-bay roof has queen posts strengthened by arched braces, and is on brackets. There is no structural break between nave and chancel. Walls are plastered. Floors are C19 tiles, except for raised wood floors below benches. The porch is laid with C15 tiles.

PRINCIPAL FIXTURES: The C14 octagonal font has cusped arches on a round stem. There is a neo-classical tablet to John Davidson (d 1837) and 3 C19 brass plaques. A metal Royal Arms, in relief, is Georgian of the early C19. Benches with poppy heads are part of the 1843 restoration, as is the Gothic communion rail with open arcading. The later stone polygonal pulpit has blind Gothic panels. A nave south window shows SS James and Peter, c1900, probably by Clayton and Bell.

HISTORY: A church of c1300, restored in 1843 when the bellcote was added. Benches also date from the restoration.

REASONS FOR DESIGNATION: The church of St James, Bredicot, is listed at Grade II for the following principal reasons:
* It is a small rural church including medieval fabric, including floor tiles.
* The church retains external architectural character and interior detail such as the benches that are typical of the simple Gothic style favoured in the 1840s.