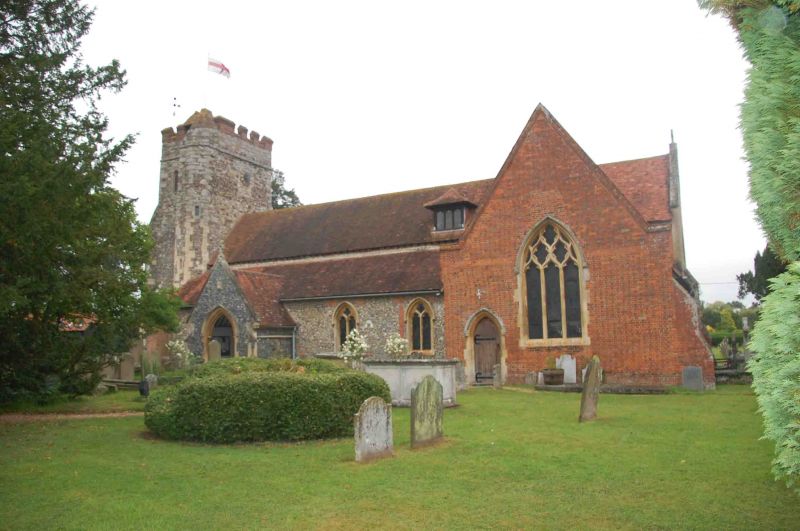 Tower: flint with stone dressings. Two stages with a chamfered plinth and a C19 brick toothed and embattled parapet. Two diagonal buttresses of two offsets at west end rising to bell chamber. Octagonal stair turret in south east angle. The west doorway is a C16 insertion with a four-centred head within a square, containing moulding, and restored jambs. Above the doorway is a restored early C14 window with three trefoiled lights and cusped intersecting tracery. Above this, a C19 trefoiled light. The bell chamber has two four-centred lights in each wall; the two on the east are blocked and covered by a clock face.

Nave, south side: three C19 windows; between the second and third is a pointed and moulded C14 doorway with a label mould. Porch to left has a pointed entrance and diagonal buttresses at the angles; roof trusses are C19 supported on C14 moulded corbels. Nave, north side: three windows, each of two trefoiled lights and a quatrefoil under a pointed head. The two easternmost are C14 restored, the western window is C19. Between the second and third windows is a C13 doorway with pointed head and a continuous external chamfer, and a C19 hood mould. A C19 trefoiled light in the west wall.

Interior: the north arcade of the nave is four bays. The two pointed eastern arches are early C14 on an octagonal pier and responds, with moulded caps and bases. The western arches are round of one square order with a similar pier and responds, and with a quirked and hollow chamfered abaci. The south arcade is similar but the abaci of the third bay are scalloped. Opening into the north chapel from the chancel, is a pointed arch springing from a semi-octagonal respond with moulded caps and bases and on the west side of this are traces of a blocked, pointed rood doorway. In the south wall of the chancel is a pointed arch similar to that in the north wall. The chancel arch is pointed, the outer order dying into the side walls and the inner one carried on C19 corbels. On the south wall of the north chapel is a trefoiled piscina with projecting basin and between the chapel and the north aisle is a C14 flying arch of two orders. The hexagonal pulpit is C19 in Jacobean style, the panelled and enriched back supporting the sounding board is early C17 and bears a shield with the date 1619 and the initials 'P.F.' The stone octagonal font is C15 and has traceried panelling.

Monuments: an elaborate marble mural monument on the north wall of the north chapel to Sir Henry Neville, d. 1593, and his wife, Elizabeth, d. 1573. The upper part is divided into two panels by Corinthian columns which support an entablature. In a niche in the west wall of the south aisle, is a marble urn on a circular base, to Katherine, d. 1658, daughter of Sir Anthony Thomas. On the west wall of the north aisle, a small white marble, oval tablet erected by Samuel Lewis of 'Jamaica in America' in memory of his wife, Dorothy, d. 1687, and her sister, Mrs. Margaret Massey, d. 1681.