A Grade I Listed Building in Swallowfield, Wokingham 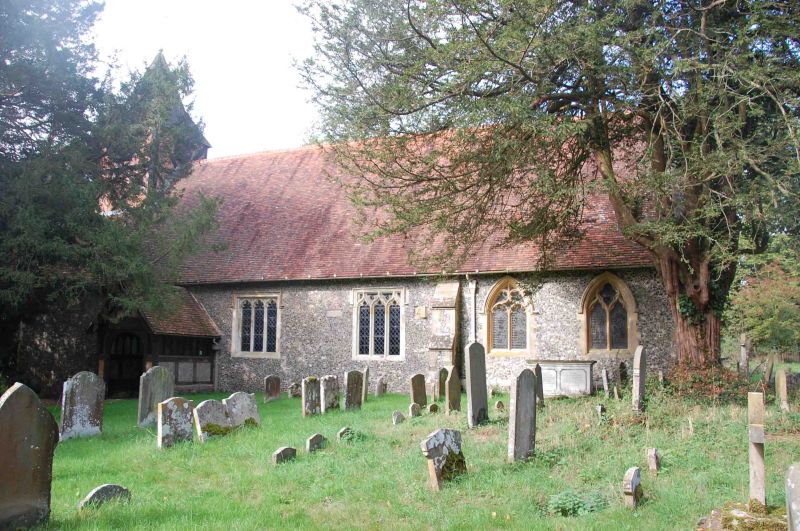 SWALLOWFIELD CHURCH ROAD
SU 76 SW
11/22 (North-east side)
26.1.67 Church of All Saints
G.V. I
Parish Church. C12, altered C13 and C15; transept added by the Russell
family in 1836 which covers their vault; a general restoration in 1871.
Flint with stone dressings, tiled gabled roof and timber framed bellcote
with brick infill. Continuous nave and chancel, north transept, south
porch, and bellcote. Bellcote:- at west end of nave. C19 built from
old timber supported from the floor of the nave with large scissor bracing;
surmounted by a shingle octagonal spire. Nave; north side:- two C19
traceried windows, between them a C12 doorway with jambs of 3 orders,
the inner and middle are slightly chamfered; detached shafts with moulded
braces and scalloped capitals within the angles. The 2 orders of the round
arch are moulded and the outer is enriched with zigzag. West front:-
3 trefoiled lights with C19 heads. South side:- 3 windows, the easternmost
is late C14 with 3 ogee trefoiled lights with semi-quatrefoils above in
square head and moulded label. The second is C15 with 3 cinquefoiled
lights under a square head and C19 label. The third window is C19;
To the west of it, high up, is the head of a small C13 lancet window.
Between the 2nd and 3rd windows is a late C13 doorway of a single order
with three-quarter edge rolls, and with moulded bases and mutilated bell
capitals. The arch is round and probably C15. Chancel; east front:-
three C19 windows with some old stonework, and bulls eye over. North front:-
a window with 2 cinquefoil lights under a traceried, pointed head with the
foils of the tracery converted into soffite cusps. South front:- Two C19
windows with a two-stage buttress to the left of the westernmost.
Transept; north side:- a window of 3 lights under a traceried head of
C15 style. Interior:- 5 bays of arched braced collar trusses to nave,with
butt purlins, windbraces, and heavy tie beams with curved braces. The
chancel roof is similar, but without tie beams. The transept has a
plastered 4-centred ceiling, with moulded wooden ribs. A piscina to the
east of the northern most window of the north wall of the nave has a
pointed head and a round basin; a C19 piscina has been formed from the
east jambs of the south window in the chancel. Fittings include an old
chest thought to be late C17, with a round lid and bound with plain strap
ironwork, near the north door of the nave. At the west end there is a C19
arched recess containing a stone coffin with a raised cross on its lid,
said to contain the bones of John le Despenser who died in 1275. The
octagonal font is C19. Monuments include: two C15 brasses in the floor
of the chancel; the smaller to the north of the altar, with an inscription
to Margery, wife of Thomas Letterford, and above a figure of a lady in
C15 costume. The larger brass on the south side in a Purbeck marble slab
with 4 shields at its corners, has the figures of a man in C16 armour,
and a woman in a long gown, head-dress and veil. The inscription is to
'Crystofer Lytkoft Esquyer' died 1554. In the Russell transept are 2
large C17 mural monuments of classic design, one to John Backhouse
of Swallowfield, who died in 1649, and the other to various members of the
same family. There are also later monuments to the Russell family. At
the west end of the nave are other C18, and later monuments. On the
south wall of the nave outside, is a small stone with an inscription to
Edward Swayhe, died February 1650, and next to this is a stone sundial.
Stained glass:- a 3-light window in the nave by Hardman, and a window
in the north transept by Holiday 1884. It stands in the south part of
Swallowfield Park, on a sloping site, falling to the River Blackwater on
the west and is surrounded by trees. V.C.H. Vol.III p.272. B.O.E. (Berkshire)
p.238.