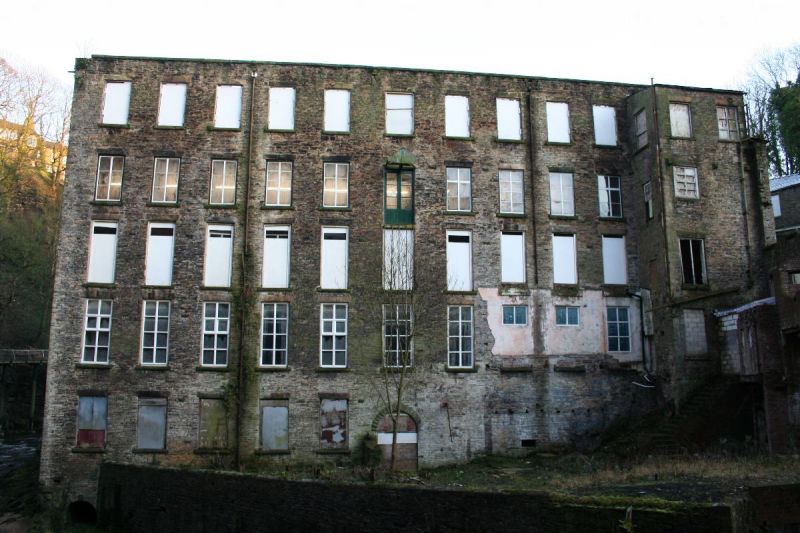 These components are; OLD MILL, c.1790 to the north, with a narrow LINK BLOCK connecting it to COTTON MILL, 1860, to the south-west, and with a later brick BOILER HOUSE attached to the south-west side wall. Behind this, WATERCOURSE WALL and TAILRACE ARCH. Attached at the south corner of the 1860 mill, and extending southwards, the L-shaped WEAVING MILL, c.1860. Within the angle of the L-shaped range, a tapered square CHIMNEY, with attached RETAINING WALL extending north and south to define approach to short flight of stone STEPS. These lead into a narrow yard bounded on the cast side by a range of service buildings, including MILL HOUSE, OFFICE, OPEN-FRONTED SHED, WORKSHOP and SMITHY. To the rear of Old Mill, the mill WEIR, with attached raised WATERCOURSE WALLS, RETAINING WALLS, SLUICE GATES and HEADRACE ARCHES with STEPS above.

INTERIOR: fireproof construction for both the mill and the attached stair tower. Mill with transverse brick ceiling vaults supported on two rows of cast-iron columns and cast-iron beams with side flanges and circular yokes at the junctions with the tie beams. Cast-iron bearing boxes and blocked floor traps for an upright power shaft are visible on the north-cast end avail. The basement incorporates the remains of an earlier water-powered mill with two wheel pits, one of which remains accessible through a tail race arch in the north-west corner of the building.

The attached single-storey BOILER HOUSE is a replacement for an earlier building in the same position. Shallow-pitched roof with small ridge louvre. The building still houses a single Lancashire boiler. To the rear, the rubble stone WATERCOURSE WALL for the cast tailrace to the cotton mill, and the shallow stone TAILRACE ARCH for the western tailrace.

INTERIOR: timber floor construction, with cross beams supported originally by a single column of slender cast-iron columns. At ground floor level, these were supplemented by columns on either side of the originals. Substantial roof trusses, with struts inclined inwards to support collars which carry short king posts. CHIMNEY forms part of 1860 development and was linked by underground flue to Cotton Mill basement, which housed the steam engine. Range of ancillary buildings extending northwards from south end of yard includes a three storey, two bay HOUSE of coursed grindstone, with a ground floor 8-over-8 pane sash window, and windows with C20 frames above, a two storey, three bay OFFICE with a long ground floor office window, first floor 2-over-2 pane sashes, and a panelled, half glazed L-shaped interior corridor.

Further north, an OPEN-FRONTED SHED, with workshops above, linked to a taller six-bay WORKSHOP of rubble gritstone, formerly joiners shop, with mechanics shop above, and added SMITHY to rear, with forge remaining in situ. To north-east, at rear of Old Mill, the masonry curved WEIR extends the full width of the River Goyt from the WATERCOURSE WALL. At the north end of the wall, a pair of cast-iron sluice gates and bevel-geared controls are located at the mouth of the headrace, at the end of which are masonry HEADRACE ARCHES, one within the other, with a flight of steps over, leading up to Old Mill.

HISTORY: Torr Vale Mill was built as a water-powered cotton spinning and weaving factory c.1790. The present Old Mill probably served the now demolished water-powered spinning mill as a handloom weaving shop. The site was enlarged and remodelled between 1860 and 1879, and new spinning and weaving buildings erected, the former incorporating the basement storey of the earlier spinning mill which housed its water wheels and wheel pits. These were used in tandem with a newly introduced steam engine to power the site until the 1940s.

Torr Vale Mill is a near-complete example of a multi-phase integrated cotton spinning and weaving factory, which retains extensive evidence for both water- and steam-powered phases of manufacture, buildings which represent each stage of the development chronology of the site, and examples of both fireproof and conventional timber-floored construction. There is also clear evidence of manufacturing processes and power transmission having been adapted to the constraints of the steeply sided valley it sits within. As such it represents a remarkable survival, its significance enhanced by the fact that it has remained in continuous use for textile manufacture from the 1790s.