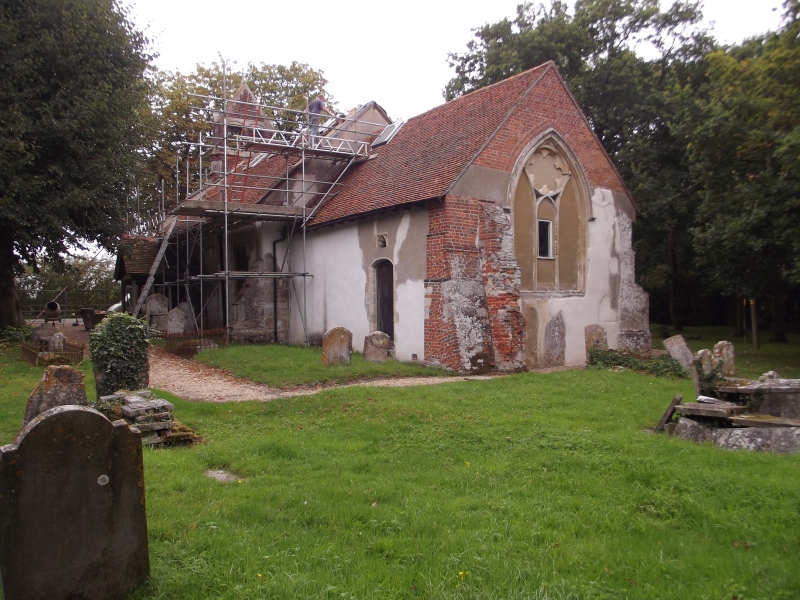 Parish church, now Greek Orthodox church. C12 origin, with C15 and C19 details.
Walls of stone rubble including indurated gravel conglomerate, mainly plastered,
repaired with red brick, with limestone dressings. Porch timber framed on red
brick plinth in English bond. Roofs of handmade red clay tiles. Nave walls
C12. Chancel rebuilt in C13. S porch c.1500. The Chancel has a C19 E window;
the E wall is much repaired and buttressed with brick. No apertures are visible
in the N wall, although there was formerly a C19 N vestry. The S wall has a C19
doorway and part of a C19 window, blocked on the inside, and a C13 piscina with
chamfered and rebated jambs and 2-centred head. C20 partition across the
Chancel. The C15 chancel-arch is 2-centred, of 2 hollow-chamfered orders, dying
on to the hollow-chamfered responds. The roof is of 14 coupled rafters with
soulaces and ashlar-pieces, medieval in origin, but more than half of it is C19
restoration. The Nave has in the N wall 3 windows; the easternmost and
westernmost are C19; the middle window is C15, of 2 cinquefoiled lights in a
square head with moulded label. W of it is the C15 N doorway, with moulded
jambs and 2-centred arch and label. The internal splays are moulded to form
half-round shafts with capitals, and 2 hollow-chamfers. The rear-arch is of
shallow 4-centred form, with double-ogee moulding. The C15 door-leaf is of
V-edged boards, with one strap hinge with incised herringbone pattern, the lower
half bricked up externally, and wholly blocked internally. In the S wall are 3
windows similar in date and details to those in the N wall; the middle window is
blocked internally, and only the cinquefoiled head and label are visible
externally. Between the 2 western windows is the C15 S doorway, with partly
restored moulded jambs and 2-centred arch, and moulded label with headstops of 2
bishops, defaced. In the W wall is a C19 window of one light with splays and
hollow-chamfered 2-centred rear-arch, possibly C13. At the W end is a C19 brick
bellcote. The roof of the Nave is in 3 bays, each of 7 rafter couples with
soulaces and ashlar-pieces, medieval; 5 couples at the W end have been renewed
in the C19. At the E end, against the chancel-arch, are a hollow-chamfered
tiebeam and wall-pieces, with solid knees. The second tiebeam is richly
moulded, with hollow-chamfered wall-pieces and solid knees. The third tiebeam
is modern; there is not one at the W end. The S porch is of C15 or early C16
origin, much restored in the C19. It retains base walls of early red brick in
English bond, with Cl9 stone copings. The roof is of crownpost construction, of
which 5 of the 6 rafter couples, the cranked inner tiebeam and short plain
crownpost with 2 cranked braces, are original. In the blocked N doorway is a
mutilated stone effigy of a man in armour, with bascinet, camail with a series
of lappets each with a crescent, surcoat and sword-belt, head on helm, legs and
arms missing and figure much defaced, c.1380. P. Morant states that in his
time the church had a timber belfry with 2 bells and a shingled spire. (The
History and Antiquities of Essex, 1768, I, 394). Of the 2 bells recorded by the
RCHM, the one dated 1575 has been stolen; the other, by Miles Graye, 1664, has
been removed for safety to the Greek orthodox Monastery, Rectory Road. The font
recorded by the RCHM, now broken, is also in store at the Monastery at the time
of survey, April 1985.