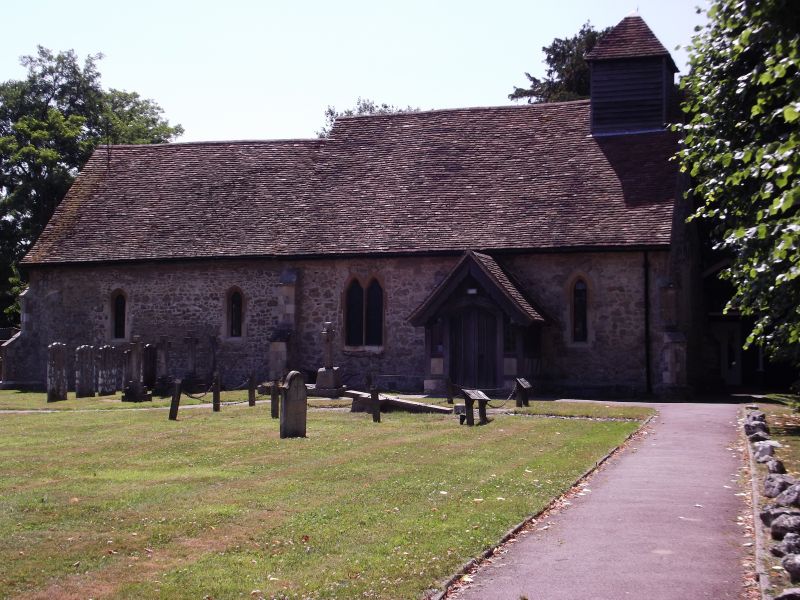 EXTERIOR
Nave has simple C19 2-light windows with trefoiled lights in the N and S walls to the E of the doors, and lancets to the W of the doors. The 3-light W window is also C19. Late C14 N door with moulded jambs, pointed arch and hood mould with head stops. Timber N porch on dwarf walls. Probably C17 timber bell-cote over W end of nave. Nave S door is similar to that on the N but has no hood mould. Chancel E window of 3 lights, C19 reusing some earlier stone in the splays. Two heavily renewed C13 lancets in the chancel N and S walls. The former NW and SW quoins of the chancel are visible as straight joints slightly to the E of the junction with the nave. C19 S vestry has a 2-light plate tracery S window.

SUBSIDIARY FEATURES
Table tomb in the churchyard to Thomas Blackmore, d. 1679 and his daughters Ann d.1677 and Elizabeth d. 1690. C20 lychgate.
The church forms a group with Nevendon Hall, The Rectory and Barn.

HISTORY
Nevendon as a place is in the Domesday book of 1086, but if there was a church there in the late C11, it was not mentioned, although it was not uncommon for churches to be omitted. It is likely that the earliest church was built of timber, and that it was only gradually rebuilt in stone. The earliest fabric is the C13 chancel, but this was probably added to an earlier timber nave. The chancel was extended slightly to the W, and the nave was rebuilt in the C14. The whole building was reroofed in the C15. The bell turret was added in the C17. The church was restored and S vestry added in 1858-9 to designs by Joseph Peacock. The N porch was added in 1928 to designs by Sir Charles Nicholson. The church has always been a rectory, but it was never a wealthy living, and the simplicity of the church reflects the relative poverty of the parish in the past. In the C20, Nevendon has largely been absorbed into the new town of Basildon, but being on the edge, still retains something of its individual identity.

REASONS FOR DESIGNATION
The church of St Peter, Wickford, Essex is designated at Grade II* for the following principal reasons:
* Small parish church of the C13 and C14, restored in the C19 and C20.
* Nave and chancel roofs C15.
* Retains evidence for its having been extended in several phases from a timber church.