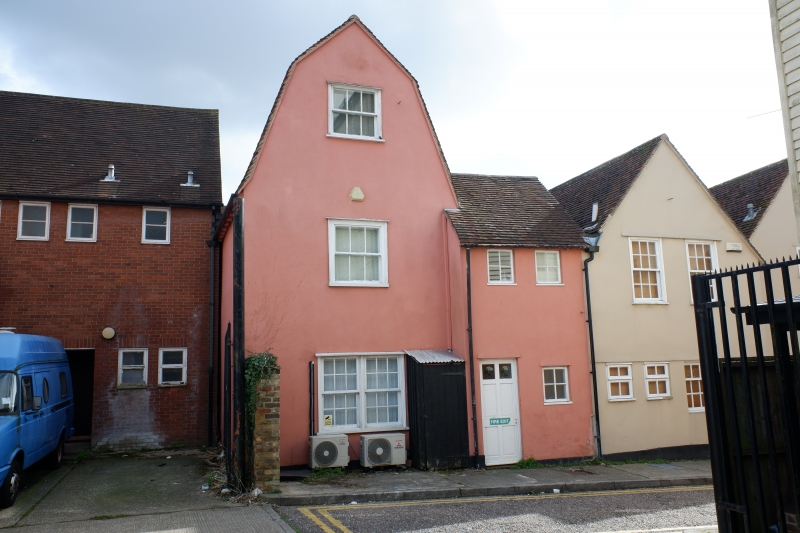 A former terraced house dating from the C18, converted in the C20 for commercial use.

PLAN: the building has a square plan and is three bays wide and two and a half storeys high.

EXTERIOR: the building has a cross-wing at its north end, with a mansard gable which faces the street. At ground floor there is a pair of doors, the central one with pilasters and moulded cornice. There is also a shallow, bay window to the right of the door, which is supported on corbels. At first floor there is a 12 pane side hung casement and a three over three sash window. There is also a smaller three over three sash window at attic level.

INTERIOR: the interior has been refurbished in the C20 for use as a commercial premises and little of the timber framing is visible.

Braintree lies in north Essex, approximately 40 miles north-east of London. It dates from the Roman occupation and developed as settlement at the junction of the two roads that were built, although it was later abandoned when the Romans left Britain.

Braintree was recorded in the Domesday Book of 1085 when it was called Branchetreu and consisted of 30 acres in the possession of Richard, son of Count Gilbert. The success of the town was due to its strategic importance in terms of communication and Braintree became a place for travellers to stay on their way to and from other important town, such as Bury St Edmunds and London. In 1190 it was granted a Market Charter, by the Bishop of London, to hold a weekly market and animal fayre. This in turn led to the establishment of smaller satellite villages nearby.

The town prospered from the C17 when Flemish immigrants made the town famous for its wool cloth trade, producing top quality cloth for the high-end market .The wool trade died out in the early 1800s and Braintree became a centre for silk manufacturing when George Courtauld opened a silk mill in the town. By the mid-C19, Braintree was a thriving agricultural and textile town, and benefitted from a railway connection to London. The town's historic connection with the wealthy Courtauld family can be seen through many of the town's public buildings such as the town hall and public gardens established in 1888.

In 1973 a terrace of three, part C17, part C18 timber-framed buildings, then numbered 12-16 New Street, was added to the statutory list as two separate cases, No.12 and Nos.14-16. During the 1980s, New Street was pedestrianised and a new block of 10 units was inserted into the existing row of buildings. The street was consequently re-numbered and the listed buildings were re-allocated new street numbers: No.12 became No.22 and Nos.14-16 became Nos.24-26.

No. 22 New Street is designated at Grade II for the following principal reasons:
* Historical interest: it is a timber framed building dating from the C18, the fabric of which survives substantially intact;
* Group value: it forms part of a terrace of three houses, of which Nos.24-26 are also listed at Grade II.