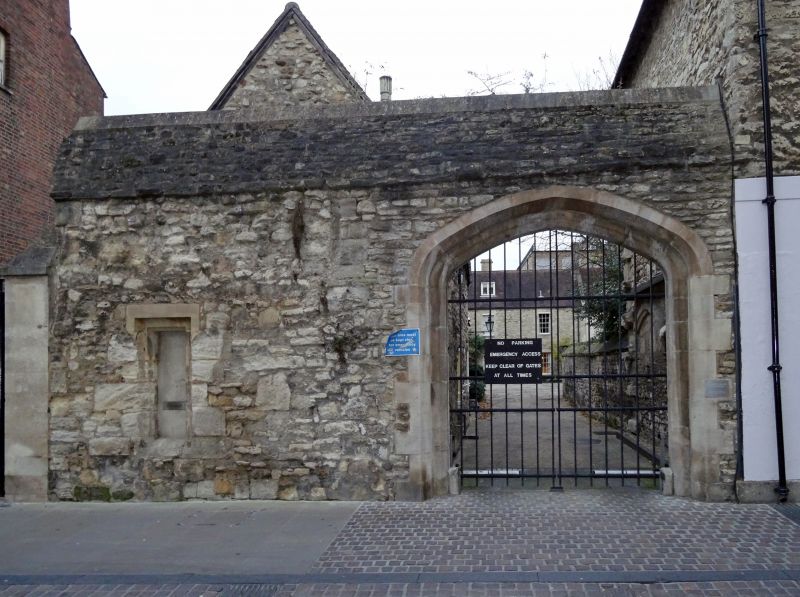 2.
RCHM 124. House, West gateway and East doorway, (1) The C16 West gateway
(of St Mary's College), leading from the street, has an outer archway with
a 4-centred arch and on the South, the springings of the vaulting of the
C15 gate-hall. The North wall has the remains of a blocked window. Next
to the gate-hall, and on the South and further to the East, is a 2-storeyed
rubble outbuilding which may be C17. (2) The C17 East doorway (at the West
end of Frewin Court and approached from Cornmarket Street) has been reset;
in it is a panelled wood door with a wicket and an elliptical head with
the date 1666 in the spandrels. (3) The house consists of an L-shaped block
with (a) West wing (b) South wing and (c) additions on East. (a) The West
wing retains the cellar of St Mary's College the upper part having been converted
and rebuilt as a house about 1582. The cellar is medieval and retains what
is probably a reused late C12 cylindrical stone column with a moulded base
and a scalloped cap; from this rise 2 later pointed stone arches under a
barrel vault. The South elevation was refaced in early C18 and now consists
of 2-storeyed rubble with a band at the 1st floor, stone coping, 3 stone-faced
stacks and a modern red tile roof. The upper storey is a C19 replacement.
The ground floor has a central doorway with a C18 2-columned porch with a
moulded entablature; to East of this are 3 modern sash windows and on the
West of it a 3-light French window. Over the porch in the lst floor is a
large sundial, dated 1888, in a pedimented frame and to West of this a 3-light
window in a plain stone frame; to East are 3 sash windows. On the North
of this wing are later additions, and the alterations here made by Dr Shadwell
after 1887 were carried out by Graham Jackson, architect. (b) The South
wing was built in 1721 and consists of a 2-storeyed rubble building with
a brown tile roof in which are 2 hipped attic dormers on the West and 3 on
the East. In the West elevation are 3 1st-floor sash windows and 2 in the
ground floor, all in stone frames. The modern stone porch erected by Dr
Shadwell in the North West angle has a segmental pediment and a moulded frame
over the head of the doorway. In it is inscribed a chronogram incorporating
the names of Frewin and Shadwell. The East side of this wing has a large
rebuilt eaves stack of stone and there are some C18 windows here. (c) The
2 1-storeyed buildings on East are of indeterminate but late date; not included
in the grading. Interior: RCHM p 171 b. Includes the medieval cellar,
late C16 panelling, plaster ceilings and a fireplace and some C18 features.
History In 1435 the Augustinian College of St Mary was founded on the site.
After being dissolved in 1540 the buildings became a Hall of the University
and later in C16 a charity school and almshouse. In 1580 the house and site
passed by exchange to Brazenose College, the present owners. In 1582 the
site was let to Griffith Lloyd (Principal of Jesus College, d 1586) who built,
or rebuilt, what is now the ground floor of the West wing over the then existing
cellar. Dr Richard Frewin (Dictionary of National Biography), another tenant
in early C18, built the South wing and apparently also doubled the width
of the West wing and refaced it. On his death in 1761 he left the lease
as a residence for the Regius Professor of Medicine, which use was continued
until 1849. In 1860-1 the house was occupied by the Prince of Wales, afterwards
King Edward VII and subsequently by James Skene (Dictionary of National Biography),
Dr C L Shadwell, Provost of oriel, in 1887 and by Sir Charles Oman (d 1946).
(See Proc Oxf Arch and Hist Soc VI (1894) 38-42; H Paintin's Hist Oxf Houses
No 1 Frewin Hall; Oxfordsh Arch Soc Rept 1931. No 76, pp. 367-391).