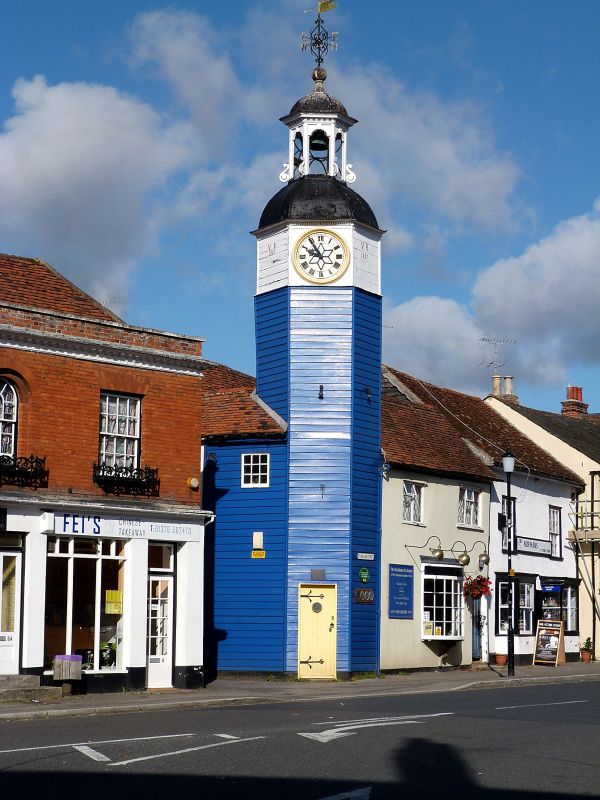 House, C14 and c.1600, extended in C17 and C19, now shop, bakery and flat over,
and clock tower, late C18. Timber framed, plastered and weatherboarded, roofed
with handmade red plain tiles. 2-bay range of narrow span facing NE, and wider
parallel range to rear. Hexagonal clock tower built into front left corner of
front range. C14 one-bay wing to rear of left bay, with late C16 axial stack at
front end, and C17 2-bay extension beyond, with axial stack in rear bay. C19
extension of red brick in Flemish bond beyond, the rear gable end
weatherboarded. House of 2 storeys, clock tower of 4 stages. Ground floor, one
C20 bow shop window. First floor, 2 C20 metal casements with diamond leading.
Open foot passage at right end, entrance to shop off passage. Continuous roof
over both parallel ranges with gablet hip at left end, the clock tower
protruding. The tower is weatherboarded, with clocks on the N and SE
elevations, moulded and dentilled cornice, domed lead roof, hexagonal cupola
with bell, ogival metal roof, ball finial and iron weathervane; 2 painted
inscriptions 'V.R. 1887'. The rear elevation has on the ground floor an
original window of c.1600 with one ovolo mullion and 2 diamond saddle bars with
modern diamond leaded glazing. An original doorway with plain head leads
through from the front to the rear range. In the rear range, chamfered axial
and transverse beams with lamb's tongue stops, and C18 attached corner cupboard
with half-round arched head, spheroid interior and profiled shelves. C20 grate
in wide wood-burning hearth facing forwards, similar hearth to rear blocked. In
the passage to right a chamfered beam with plain stops is exposed, with heavy
plain joists of square section jointed to it with low-central tenons. In the
rear wing the beam and joists are similar. In the extension beyond, plain
joists of vertical section are jointed to a chamfered axial beam with soffit
tenons with diminished haunches; wood-burning hearth, chamfered mantel beam with
lamb's tongue and notch stop at right end only, altered or re-used. Upper
storey not inspected. The clock tower was built in 1787 to replace a clock on
the Corn Market House, which formerly stood in the middle of Market Hill, and
which was demolished in that year. It was restored in 1887 to mark Queen
Victoria's golden jubilee. (G.F. Beaumont, A History of Coggeshall in Essex,
1890, 174-5). RCHM 49.